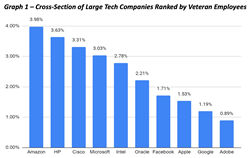 A new, large-scale research study by Findem, a pioneer in people intelligence, provides a detailed look at the status of veterans in the workforce, including the companies and industries employing the highest percentage of veterans, the greatest opportunities for veterans in leadership roles and major shifts that have taken place in recent years.

More than 200,000 veterans enter civilian life each year, according to the Department of Defense, and are often challenged by transitioning into industries, companies and positions where their military skills might not directly translate. Findem’s research examines the state of veteran employment and reveals which companies, by industry, are doing the best job.

Amazon’s and HP’s Hiring Initiatives Make Them Standouts Among Tech Titans
Many technical skills acquired during service tend to align well with positions in the tech industry, making it one of the easier transition paths for veterans. Still, there’s work to be done, and that led several tech giants in 2016 to pledge to hire 1,000-3,000 veterans or their spouses by 2021.

Which tech giants are performing best? Findem analyzed U.S. workforce data from 10 tech leaders and found Amazon and HP – two of the companies that made the pledge and have instituted other hiring initiatives – have the highest percentages of overall veteran employees. Amazon ranks first with 3.98%, with second-place HP close behind with 3.63%. Cisco is third with 3.31%, followed by Microsoft, Intel, Oracle, Facebook, Apple, Google and Adobe. [See Graph 1].

HP and Oracle tie when it comes to employing veterans in leadership positions (director and up), although the tally of .08% apiece is not an exceptional percentage. Cisco and Microsoft have the most veterans in sales roles, with 4.41% and 3.89%, respectively, and HP and Microsoft in R&D roles with 3.86% and 2.44%, respectively.

“Despite the fact that veterans are known for possessing strong leadership and strategic skills, as well as the capacity to translate them to positions in the civilian world, our data shows there’s still work to be done when it comes to hiring veterans to fill leadership roles,” said Findem CEO Hari Kolam. “Organizations should be consistently evaluating their workforce to identify their diversity gaps and create a plan to fill them. You don’t know what you don’t know, so it’s imperative to make workforce assessments a regular practice.”

Veterans by Industry – Tech and Services Lead, Real Estate and Travel Lag
Findem’s analysis shows the technology industry employs the largest percentage of veterans overall, constituting 32% of its labor force. Services is second with 17%, followed by manufacturing with 12%, finance and consumer goods/retail with 11% apiece, healthcare with 8%, travel & hospitality with 5% and real estate with just 3%. [See Graph 2].

Veterans by Company – Triple Canopy Most Successful
Not surprisingly, out of all U.S. companies, Findem found those with the highest percentage of veteran employees by headcount tend to operate in the government, security and IT sectors. Triple Canopy – with a workforce composed of 62% of veterans – employs the most veterans by a wide margin. Defense Contract Management Agency is a distant second with 45%, DynCorp ranks third with 42%, Engility fourth with 30% and ManTech fifth with 29%. [See Graph 3].

Identifying the Leading Employers by Industry
Drilling down further, the top veteran employers across the eight industries studied include Amazon for consumer goods/retail, Kaiser Permanente for healthcare, Raytheon for manufacturing, Keller Williams for real estate, Lockheed Martin for technology, USAA for finance, USPS for services and Delta Airlines for travel & hospitality. [See Graph 4 for top five in each industry].

Industries Where Veterans Are Holding Leadership Roles
Of the industries analyzed, finance and healthcare employ the most veterans in leadership positions (director level and above), and that was consistently the case between 2016 and 2019. Those two industries have also seen the highest percentage of growth over that time period, with finance showing a notable 4% increase. On the flip side, manufacturing, technology and retail fall at the lower end of the spectrum. In fact, while technology employs the highest percentage of veterans of any industry studied, only 9% are in higher-level roles. [See Graph 5].

Methodology
The research was conducted in October and November 2020. Using its AI-driven platform, Findem indexed all publicly-available people data and analyzed data in the instances where the individual showed experience serving in a branch of the military. The analysis only included people who have profiles that are publicly available on the internet. The research surfaced approximately 2 million profiles. Data on the companies and industries correlates to the veteran profiles that were analyzed. There is a 5% margin of error.

About Findem
Findem is transforming how companies make their people decisions. Backed by AI and all the world’s people data, our People Intelligence platform empowers HR and talent leaders with the data-driven insights they need to architect and develop a best-of-class workforce. With Findem’s platform, companies can uncover the talent attributes that matter most to their business goals, benchmark their talent internally and externally, identify skills and diversity gaps, and fill those gaps through automatic introductions to exceptional and interested candidates—all without bias. Visit us at http://www.findem.ai.

Graph 3 - U.S. Companies Employing the Highest Percentage of VeteransPercentages based on workforce headcount

Graph 4 - Top 5 Companies, by Industry, Employing the Most Veterans