A team from Draper and MIT used gold spheres wrapped in synthesized DNA to grow oriented crystals—a technology with applications in optics, sensing and materials design. 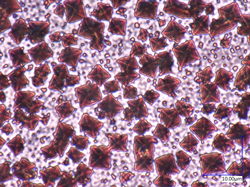 A team from Draper and MIT used gold spheres wrapped in synthesized DNA to grow oriented crystals—a technology with applications in optics, sensing and materials design.

“DNA is not just the stuff of our genetic code. It is also a means to design self-assembling materials. Unlocking self-assembly could allow us to create materials that don’t exist naturally and we can’t currently create ourselves.” - Diana Lewis of Draper.

Nanoparticles have gained a reputation in recent years due to their applications in fields that include data storage, drug delivery, imaging and sensing. With increased demand for nanoparticles, different methods have been developed for their synthesis in different sectors. One barrier to wider adoption is the inability to tailor the nanoparticles’ relative positions on a surface.

Now, a team from Draper and MIT has discovered how to fabricate nanoparticle superlattices on surfaces with defined sizes, shapes and orientations. They did it by using spherical nanoparticles of gold, coated with specially designed single strands of synthesized DNA. The new approach is described in a paper in the journal Nature Materials, written by Diana Lewis and David Carter at Draper and Robert Macfarlane and Leonardo Zornberg at MIT.

Using nanoparticle self-assembly—a simple, efficient method to organize nanoparticles into a precise, pre-determined structure—to grow crystals on a surface is an important achievement. The spatial arrangements of nanoparticles can be potentially used to build increasingly complex structures leading to a wide variety of materials that can be used for different purposes.

“DNA is not just the stuff of our genetic code,” Lewis said. “It is also a means to design self-assembling materials. DNA is a connector and serves as a way to change how particles interact with each other, and with surfaces. Unlocking self-assembly could allow us to create materials that don’t exist naturally and we can’t currently create ourselves.”

DNA-grafted nanoparticles’ crystallization behaviors mimic traditional atomic crystal formation, earning them the moniker “programmable atom equivalents.” The new research demonstrates how to use their programmability to create micron-scale crystals with customizable size, orientation and the most favored crystallographic symmetry for a set of PAEs, which is the one that maximizes the number of DNA connections formed.

In the future, these microstructures could be used to improve materials in making optical resonators, soft structural materials, chemical and biological sensors and other applications. DNA-grafted nanoparticles also provide an ideal building block for studying crystal nucleation and growth on substrates, the authors said.

The work was partly supported by a Draper fellowship and the National Science Foundation. Lewis did the work while a Draper Fellow and student in MIT’s Ph.D. program for materials science in Robert Macfarlane’s lab.

Any opinions, findings and conclusions or recommendations expressed in this material are those of the authors and do not necessarily reflect the views of the National Science Foundation.