Officially inaugurated in August 2019, the Saratov Gagarin International Airport near Saratov, Russia, is only the third all-new airport built in Russia since 1989. Construction of the airport terminal complex was completed toward the end of last year; PENETRON ADMIX was used to waterproof key concrete elements in the complex. 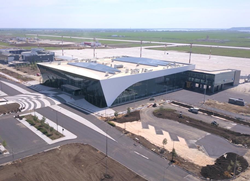 Protection in a harsh climate: PENETRON ADMIX was added to the concrete mix to waterproof the foundation of the new airport’s control tower and the concrete drinking water reservoirs.

Officially inaugurated in August 2019, the Saratov Gagarin International Airport near Saratov, Russia, is only the third all-new airport built in Russia since 1989. Construction of the airport terminal complex was completed toward the end of last year; PENETRON ADMIX was used to waterproof key concrete elements in the complex.

Named after legendary Russian cosmonaut Yuri Gagarin, the Saratov Gagarin International Airport is about 20 km (>12 miles) north of the city of Saratov (pop. ca. 2.5 million). This 10 billion-ruble ($150 million) project replaced the previous Tsentralny Airport as the main commercial airport for the Saratov Oblast in the Volga Federal Region of Russia. Designed by ASADOV Architectural Bureau, the new airport has an annual capacity of one million passengers. The project’s design was nominated for the Russian Union of Architects Award.

“About 15 years ago, it became increasingly clear that the Saratov Central Airport, in operation since the 1930s, would soon be too small for the forecasted increase in airline passengers,” adds Igor Chernogolov, President of Penetron Russia. “The new Saratov Gagarin International Airport is the latest in a series of new airports and airport expansions that have been taking place across Russia.”

Looking for a Robust Waterproofing Solution
Shortly after construction was initiated in late 2014, Penetron Russia was asked to propose a robust waterproofing solution for the foundation of the new airport’s control tower, along with the concrete reservoirs that provide a reliable potable water supply.

“Our team recommended PENETRON ADMIX, a crystalline waterproofing admixture, to ensure a concrete mix with the required waterproofing characteristics, as well as the much-needed durability to withstand the fairly harsh local climate,” adds Igor Chernogolov. “Due to the experience we have gained from past involvement in other airport projects in Russia and adjacent countries, our team was confident this solution would exceed their strict requirements.”

Adding Durability and a Self-Healing Capability
Easily mixed in during batching and unaffected by climatic conditions, PENETRON ADMIX becomes an integral part of the concrete matrix by reacting to moisture in fresh concrete, which generates a non-soluble crystalline formation throughout the pores and capillary tracts of the concrete. These crystals permanently seal the microcracks, pores and capillaries in the concrete against the penetration of water or liquids from any direction.

“With low permeability and self-healing capabilities to seal new cracks, the PENETRON ADMIX-treated concrete elements will enjoy an extended service life,” concludes Igor Chernogolov. “Thanks to PENETRON ADMIX, maintenance for the treated structure will be minimal for the Saratov Gagarin International Airport – saving time and money.”

Built on PENETRON: The main terminal of the new Saratov Gagarin International Airport was designed by ASADOV Architectural Bureau and nominated for a Union of Architects Award.