The award-winning filmmaker and TV producer Charles Mattocks has launched an exclusive premier series on Glewed TV that focuses on using a keto lifestyle to reverse type 2 diabetes. 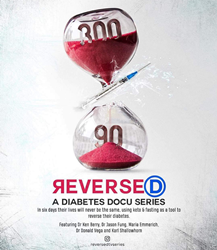 In this riveting eight-part series, we feature the use of the ketogenic lifestyle and intermittent fasting to help change the lives of these four individuals.

The award-winning filmmaker and TV producer Charles Mattocks has launched an exclusive premier series on GlewedTV. Charles has reprised his acclaimed series Reversed, that aired on the Discovery Network and shifted the focus to reversing type 2 diabetes. Charles has teamed up with some of the best in the business of keto and intermittent fasting, from Dr. Ken Berry, a Board-Certified Family Physician and Fellow in The American Academy of Family Physicians. He is a well-known for his work with the ketogenic/ low carb lifestyle. Dr. Ken's book, Lies My Doctor Told Me, is critically acclaimed and he has over 1.5 million followers alone on YouTube. Dr. Ken is seen on many outlets reaching millions with his health-related content.

Maria Emmerich is a wellness expert in nutrition and exercise. She shares a passion for helping others reach their goals of optimal health. She is a published author of over 20 books and is the founder of Maria Mind Body Health and Keto-adapted.com. Maria is a major face in the ketogenic space and is recognized by her peers for her amazing keto recipes.

In this riveting eight-part series, we feature the use of the ketogenic lifestyle and intermittent fasting to help change the lives of these four individuals. Shot in beautiful Costa Rica, Charles and the Reversed team took three people living with type 2 diabetes and brought in some of the top experts in health, nutrition, and mental health. They came together to help educate the guests on how to reverse their type 2 diabetes with diet, exercise, and an overall healthy lifestyle.

Lisa, who was also featured on season one of Reversed, is back after her husbands passing to take back her health. Jerome, who was also featured on season one, is HIV positive, living with type 2 diabetes and has heart issues, is also back after losing almost 50 pounds and by doctor’s orders, has come off his insulin. This season features two new faces, Jannet, who is fighting to be healthy for herself and her two daughters, as well as Lisa’s daughter, Amanda, who chose to take part to be a support for her mother. The results are shocking and will blow you away.

About Charles Mattocks
Every career move Celebrity Chef Charles Mattocks has made has been in keeping with his desire to touch lives in a positive way. Inspired by his uncle, the late Bob Marley, Mattocks dared to dream big. After giving a stunning performance in the title role of the Emmy nominated The Summer of Ben Tyler, Mattocks, a single Dad, decided the Hollywood lifestyle was not the best for his young son and moved across the country. Charles has appeared on The Today Show, Good Morning America, The Talk, Martha Stewart, CNN and Dr. OZ and others. Mattocks is no stranger to diabetes, as he was diagnosed with type 2 diabetes and has become a tireless advocate for diabetics everywhere. Charles is determined to help stem the time of this deadly disease. Mattocks began to use media to reach the masses. He launched season one of Reversed in 2017, with a vision and passion to help people live better lives.

About Glewed TV
Glewed TV was founded by a team of creators and technologists that have successfully launched multiple streaming channels in the past five years. Glewed TV is one of the ways cord cutters are saving with free access to premium on-demand content. No subscription fees are required to watch movies and TV programs that are unique, engaging, immediate and convenient. Glewed TV is ad-supported and free across all platforms. Glewed TV sources and produces content of high production value with over 25,000 hours available. Main content categories include live tv, news, food, sports, DIY, documentaries, animals/wildlife, travel, comedy, and movies.