New Social Reform Music Video “World Peace Comes From Within” from UR2.Global – A Call to Those Seeking Peace from World Leaders Versus Looking Within Themselves

UR2.Global Arts Project - a not-for-profit organization, releases of an original song and music video titled “World Peace Comes from Within”, to help mankind understand that world peace begins inside each individual and doesn’t just rest on our world leaders. The music video dramatizes how within each person lies the inner-tools and compassion necessary to create both inner-peace and a harmonious world. 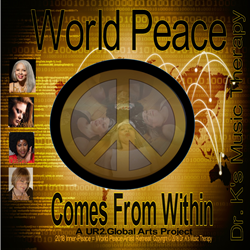 The Arts Organization president states “with so much unrest occurring in the United States and throughout the world, the song was written with the hope that people will stop looking to an authority outside of themselves for their sense of well-being and happiness, and instead look within...."

As we stand post elections in the U.S. and at the eve of the holiday season where “peace on earth and goodwill towards men” is underlined, UR2.Global Arts Project - a not-for-profit organization, releases of an original song and music video titled “World Peace Comes from Within”, to help mankind understand that world peace begins inside each individual and doesn’t just rest on our world leaders. The music video dramatizes how within each person lies the inner-tools and compassion necessary to create both inner-peace and a harmonious world. The song was a collaboration amongst the organization’s president who conceptualized the song and melody - Amelia Kemp, Ph.D., LMHC – a licensed psychotherapist, singer-songwriter and ordained metaphysician that performs as Dr. K’s Music Therapy, along with songwriters - Kristen Hope Justice and Jennifer Ferren. The song was also performed by the three songwriters including a contributing vocalist - Deanna Miller, as part of the 2nd Annual Inner-Peace Equals World Peace Artist Retreat, held in the Blue Ridge Mountains, Georgia. The song was produced by world renown producer - Premik Russell Tubbs (New York) and available for free viewing at https://www.UR2.Global. The music video is also being offered as a humanitarian effort freely to public television stations, colleges, schools, libraries, and churches world-wide to inspire and facilitate conversations about attaining inner-peace to accomplish world peace.

The organization’s president - Dr. Kemp is a well-known peace-maker for humanity and was honored as an “Artist for Peace” by Gandhi’s BE Magazine and is also an author that continues to seek peaceful therapeutic and uplifting solutions for mankind. She states that “with so much unrest occurring in the United States and throughout the world, the song was written with the hope that people will stop looking to an authority outside of themselves for their sense of well-being and happiness, and instead look within, to see what each individual can do to honor themselves and increase their own quality of life.” Thus, as the lyrics suggest, by looking within oneself, mankind can increase its own self-esteem to a level where one no longer sees their power or joy strictly coming from outside of themselves. When that happens people will find little if anything to fight with one another about. However, “if there is to be a fight” the song states it takes the form of an inner-revolution and contends that the fight is with the self, not others, and that when inner-peace is accomplished then and only then will world peace be achieved. Thereby, the arts organization co-founders state that “being a Democrat, Republican, or Independent would be a cause for celebration, since as the song proclaims variety adds to the diversity of life. Trusting that diversity doesn’t have to be a point of contention but rather a declaration of human rights which allows everyone to choose a viewpoint with passion and grace.

“Speaking of diversity, it was such an honor to see so many artists from all over the world interested in the project, where over 40 artists sought to participate. The three that were featured allowed their voices to help tell the lyrical story and will undoubtedly inspire the masses”, states Co-Founder Lamarr Kemp, Sr. Kristen Justice – an Award-winning artist, won “Best Pop Album” during her career and states that she was attracted to this inner-peace world peace project because “the idea that your inner world reflects the outer world is at the core of my being and my music.” Songwriter – Jennifer Ferren appears to agree, stating “I was attracted to the project because I’ve also spent the majority of my musical career uplifting souls having written a great of music for Unity Worldwide Ministries and Posi/New Thought CDs. And lastly, but not least, contributing vocalist - Deanna Miller is also an award-winning artist that won the Neo Soul Category for the Prayze Factor People’s Choice Awards for a song that she wrote, and states “the inner-peace/world peace project resonated with me because as an inspirational indie artist, I am dedicated to helping my fellow mankind.”

The music video echoes the psycho-spiritual arts organization’s premise that as mankind learns to align with inner-peace and appreciate one’s own value and worth, that new self-appraisal will garner compassion for others, since in learning to be at peace, and love oneself, it usually includes having to forgive oneself, states Dr. Kemp. She declares that “forgiveness is a major stop on the road to inner-peace and world peace. This is why the song is titled ‘World Peace Comes From Within’, because as we forgive ourselves, we are more apt to forgive the past deeds of others that have injured mankind throughout history.” Racism and religious tolerance are therefore naturally addressed in the song, along with an additional outcry for the collective sharing of resources, community service, and agape love being curative.

UR2.Global Arts Project is a psycho-spiritual arts project of The Sacretherapy Institute (pronounced sacred-therapy with a silent "d") with global liaisons on six continents. "UR2" means "you are too" an equal, valuable, and worthy being that deserves to glorify in high self-esteem. The cd of the song (without the music video) may be downloaded separately and is being used as a fundraiser where all proceeds will go towards UR2.Global to uplift humanity. For More Information Contact: Lamarr Kemp, Sr., MBA – Vice President – Email: UR2.Global(at)gmail.com or visit the website at https://www.UR2.Global and click the “Contact” link.
-End-