New Statistics Reveal Cardiac Arrest Survival Remains Low; To Save More Lives, the Sudden Cardiac Arrest Foundation Urges the Public to Learn CPR and How to Use AEDs.

An annual report from the American Heart Association indicates the incidence of sudden cardiac arrest occurring outside hospitals in the U.S. remains high and survival rates remain low. Bystander intervention—a key determinant of survival—also remains low. The Sudden Cardiac Arrest Foundation urges the public to learn CPR and how to use automated external defibrillators (AEDs), since immediate bystander action can triple the chance of survival. And, since most cases outside hospitals occur in the home, chances are bystanders will be called upon to help save their loved ones. 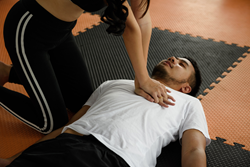 If survival rates increased to 30 percent, 70,000 additional lives could be saved each year.

According to the newly released “Heart Disease and Stroke Statistics—2019 Update: A Report from the American Heart Association,” more than 356,000 people, including 7,000 children, experience sudden unexpected cardiac arrest outside hospitals each year in the U.S. For many victims, there were no prior symptoms of a cardiac condition.

In a summary of the report, the Sudden Cardiac Arrest Foundation states that survival rates continue to languish at about 10 percent. Low survival rates are due largely to the fact that the public does not understand the need for immediate action by bystanders.

When bystanders act quickly by calling 911, starting CPR and using automated external defibrillators (AEDs) before EMS arrives, survival rates can triple—and most survivors have good neurological outcomes. In addition, since most cases (about 70 percent) occur in the home, chances are laypersons will be called upon to help save the life of a loved one.

The chances of survival from sudden cardiac arrest decrease by 10 percent each minute after onset, which is why it is so important for bystanders to act quickly. CPR involves pushing hard and fast on the center of the chest. AEDs are lifesaving devices designed for use by laypersons that provide straightforward, real-time instructions for use.

“Calling 911, starting CPR, and using the nearest AED can mean the difference between life and death for victims of sudden cardiac arrest,” said Jampel. “If survival rates increased to 30 percent, 70,000 additional lives could be saved each year.”

What is Sudden Cardiac Arrest?