While tiny in size, salamanders play a major role in the natural systems they inhabit. A new Tennessee Aquarium study predicts the ways climate shifts may disrupt salamander communities and how these changes could cascade through ecosystems. 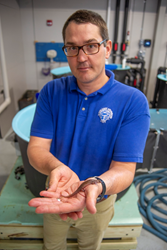 “We didn't just want to look at how salamanders will be affected by climate change. We also wanted to see what those changes could mean for their surrounding communities and the other organisms that rely on them acting the way that they do.” - Mary Lou Hoffacker, the study's lead author.

Thanks to its warm, humid climate and geological stability, the rippled hills of Southern Appalachia have long been a haven for salamanders.

Eighty percent of North America’s salamander species live within a 500-mile radius of Chattanooga, Tennessee. East Tennessee and Western North Carolina alone are home to more species than can be found in most countries.

Appalachia’s amphibious abundance is due, in large part, to salamanders’ ability to specifically adapt to hyper-specific habitats. Within a single stream, studies have shown that salamanders arrange themselves in size-structured communities that allow many species to live side by side. Larger salamanders claim the deeper, cooler water near the stream center, forcing intermediate-size species to the edge of the waterway and smaller ones onto the land.

“This is called niche partitioning,” explains Dr. Josh Ennen, an aquatic conservation biologist at the Tennessee Aquarium Conservation Institute. “That’s why we find so many species in one place, hence the huge biodiversity in this region.”

Sustaining the Southeast’s many salamander communities hinges on the environmental stability of the region’s headwater streams. The findings of a paper recently published in the international ecological journal Oecologia suggest, however, that these carefully balanced communities could be toppled by climate change.

During studies in the winter of 2016 and 2017, researchers observed habitat use by two species, Seal Salamanders, and Black-bellied Salamanders, in artificial streams systems at the Tennessee Aquarium Conservation Institute.

In the wild, these species can be found in the same waterways. Both species prefer the same habitat — cool, permanent streams — yet when they find themselves trying to share this habitat, the larger Black-bellied Salamander forces the more diminutive Seal Salamander to flee. The Seal Salamander is forced to use areas of the stream that may be warmer or those that dry up during the summer.

As cold-blooded animals, salamanders are especially sensitive to fluctuations in temperature. This made them an ideal test case for how wildlife will respond to warmer conditions, says Mary Lou Hoffacker, the study’s lead author, an alumna of Sewanee: The University of the South and the Conservation Institute’s 2017 George Benz Aquatic Research Fellow.

“Not many studies have been able to quantify actual behavioral differences that are caused by these rising temperatures,” Hoffacker says. “We didn't just want to look at how salamanders will be affected by climate change. We also wanted to see what those changes could mean for their surrounding communities and the other organisms that rely on them acting the way that they do.”

“Understanding the broad effects that rising temperatures are going to have on important communities like these is essential in helping us to prepare and better understand how we can protect them in the future.”

During the study, some of the salamanders were kept in artificial stream systems that were warmed five degrees Fahrenheit to replicate conditions projected to be reached by the end of the century if current warming trends continue.

The salamanders that were kept at current temperatures mirrored the habitat use scientists have observed in the wild. In stream systems with warmer water, however, there was less competition between the two salamanders, with Seal Salamanders spending noticeably more time alongside the Black-bellied Salamanders in the cooler center of the stream.

Because smaller-stream salamanders are accustomed to spending more time on land, past studies show that smaller salamander species will be better adapted to the warmer, drier conditions predicted to be brought about by climate shifts. The Aquarium’s study builds on this evidence by suggesting that, if climate warming reaches anticipated levels, smaller salamanders also may no longer face as much competition from their larger neighbors.

“A long history of sharing streams has allowed these species to resolve their conflicts, with the smaller species developing adaptations to live in less-optimal stream habitats,” says Dr. Kristen Cecala, a co-author of the study and assistant professor at Sewanee.

“These two species of salamanders are like siblings fighting over toys,” Cecala adds. “The older, bigger sibling claims the one they want, forcing the younger, smaller sibling to try something else. When the younger sibling goes through a growth spurt and can hold their own, this balance of power is disrupted.”

And if that happens, Ennen says, the size structuring that allows for so many species to live in Appalachia could be thrown off-balance.

“With warming temperatures, these community structures could switch, which could have a huge impact on the future, long-term stability of salamander communities,” he says.

The sheer abundance of salamanders makes them a kind of power player in Southern Appalachian ecosystems as both a predator and a prey item. As such, upsetting salamander communities could have a ripple effect on other wildlife throughout the region.

“It’s like pulling that last Jenga block out and the whole thing falls down,” says Shawna Mitchell, a co-author of the study and the Conservation Institute’s science coordinator. “If you lose the salamanders in these stream systems, that will impact the things that eat the salamanders and lead to an increase in abundance of the things the salamanders were eating.

“That’s going to change the natural balance of the region. It’s a cascade effect.”