New data from Thrive Analytics & ARtillery Intelligence reveals who's using VR, how often, and with what hardware. 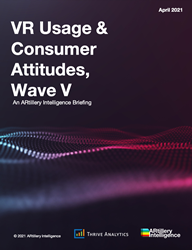 "Facebook is investing heavily in VR and is playing a long game. That investment includes bringing Quest 2's price down to accelerate its market share and network effect, which is classic Facebook."Mike Boland, Chief Analyst of ARtillery Intelligence

Non-VR users conversely report low interest in the technology – 20 percent, down from 29 percent in Wave IV. This downward trend is concerning for VR, as public interest continues to wane from its peak during the technology's circa-2017 hype cycle. The disparity between user satisfaction and non-user ambivalence represents an ongoing marketing challenge for VR.

On the bright side, Standalone VR – exemplified by Oculus Quest 2 -- was a standout in this year's survey. The Facebook-owned Quest 1 and Quest 2 have grown in use from 13 percent of survey respondents in Wave IV to 24 percent in Wave V. This is driven by Oculus' competitive feature set, expanding library of hit games & experiences, and aggressive pricing.

"Facebook is investing heavily in VR and is playing a long game," said Mike Boland, Chief Analyst of ARtillery Intelligence. "That investment includes bringing Quest 2's price down to accelerate its market share and network effect, which is classic Facebook. The result is that consumers end up with a compelling device that's less expensive than it should be."

"AR and VR are still in early adoption phases," said Thrive Analytics managing partner Jason Peaslee. "There are still technology challenges, but we think AR & VR have the ability to transform the way people work, connect, and learn. We're excited about the prospects and committed to measuring them."

Report Availability
VR Usage & Consumer Attitudes, Wave V is available through ARtillery Intelligence. Deeper access to the base data and additional strategic analysis can be obtained from Thrive Analytics.

About ARtillery Intelligence
ARtillery Intelligence chronicles the evolution of spatial computing, otherwise known as AR and VR. Through writings and multimedia, it provides deep and analytical views into the industry's biggest players, opportunities and strategies. Products include the AR Insider publication and the ARtillery PRO research subscription. Research includes monthly narrative reports, market-sizing forecasts, consumer survey data, and multimedia, all housed in a robust intelligence vault. To learn more, go to https://artillry.co/intelligence