A new survey from The Harris Poll, commissioned by Express Employment Professionals, reveals a steep drop in planned pay increases for the remainder of 2020. 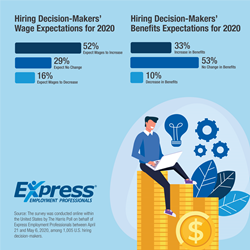 "In this unique time, being flexible with schedules and offering other non-traditional benefits in addition to a healthy company culture goes a long way." - Express CEO Bill Stoller

Compared to 2019, little more than half of U.S. hiring decision-makers (52%) expect wages to increase in the last quarter of 2020 at their companies, according to a new survey from The Harris Poll commissioned by Express Employment Professionals.

Among those hiring decision-makers who expect wages to increase, around half say the increases will be performance-based (53%) or standard cost of living (51%), while 36% say the increased wages will be market pay rates.

“The wage increases in our area are all driven by supply and demand,” said Jan Riggins, general manager of two Fort Worth, Texas, Express franchises. “Companies simply cannot fill their positions with wages that are not competitive in our current market.”

In Andover, Massachusetts, Express franchise owner John Dickey says there’s a major shortage of industrial workers for manufacturing and warehouses in his market.

“Businesses are not only raising the base hourly wage but paying ‘combat’ bonuses to keep people on the job,” he said. “If a company hasn’t raised its pay rate, it will struggle to find workers in today’s market.”

Entering the last, and usually busiest, part of the year, Riggins expects some companies to increase benefits simply due to the tight labor market and increased competition.

“I’ve also seen more remote work opportunities than ever before,” she added.

David Robb, Director of Operations at the Grand Rapids, Michigan, Express franchise says he expects companies to either keep benefits the same or decrease them due to the financial hardships of the year. However, clients are offering more flexible benefits to accommodate situations that may arise at home due to the pandemic.

“For more professional positions, many companies are still working from home and new team members are even starting off working at home,” he said. “Companies are also providing more flexibility than ever before as kids start returning to school, or in many cases, participate in virtual learning at home.”

While wages and benefits are incredibly important for recruiting and retention, Express CEO Bill Stoller says employees often stay at companies for the full employment experience.

“Even when money is tight, employees need to know their efforts are appreciated,” he said. “In this unique time, being flexible with schedules and offering other non-traditional benefits in addition to a healthy company culture goes a long way.”