A new survey from The Harris Poll, commissioned by Express Employment Professionals, reveals an optimistic outlook for wage increases, while benefits hold steady. 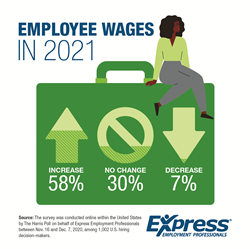 "Controlling the COVID-19 pandmic continues to be the largest factor standing in the way of a full recovery, so I’m very pleased to see businesses are optimistic for hiring to continue picking up." - Express CEO Bill Stoller

Aside from some lawmakers calling for a $15 minimum wage, forecasts are encouraging for a market-driven increase in employee wages, while benefits are largely expected to remain the same in 2021. This is according to a new survey from Express Employment Professionals.

This survey from The Harris Poll, commissioned by Express, reveals nearly 3 in 5 U.S. hiring decision-makers (58%) expect the average wage at their companies to increase this year with 30% anticipating no changes in pay. Only 7% of respondents foresee a decrease.

Of those who expect wages to increase, around half say the increases will be performance-based (55%), standard cost of living (53%) or market pay rates (40%).

Despite higher unemployment, Express experts say the hunt for talent is fierce, ultimately driving up wages.

“We saw significant wage increases throughout 2020 as employers tried to compete to get talent and incentivize people to come to work,” said David Robb, director of operations for the Express franchise in Grand Rapids, Michigan. “I think that we will see wages stabilize in early 2021 and not increase as drastically. But much of this will just depend on the competitiveness of the talent market.”

Focusing on talk of a federal $15 minimum wage mandate, a January 2021 survey from The Harris Poll revealed 66% of Americans supported this idea, while 65% are for ending the lower minimum wage for tipped workers.

“The impact of a federally mandated minimum wage would be different in every local area, as wages and cost of living can vary so drastically across the country,” Robb said. “I think it could be particularly harmful for smaller businesses who may not have the profit margins or capital to adjust their business models to stay profitable with a mandated increase in wages.”

In his market, he’s seen wages for entry-level positions increase significantly over the last two years. Despite a state minimum wage of $9.65 per hour, very few positions start below $13.

“At the heart of the minimum wage discussion is providing a living wage for anyone who has a job,” Robb added. “While that this is a valid and admirable goal, and something I strongly support, I think the solution to achieve this is much more complicated than just a mandated minimum wage increase.”

In California, a law is already in place for the minimum wage to reach $15 an hour in 2022 for businesses with more than 26 employees. Some cities have already enacted their own ordinances pushing that pay even higher.

Santa Clarita franchise owner Yvonne Rockwell says willing and able job seekers already have abundant employment opportunities in her market with the current minimum wage of $13 for small businesses and $14 for larger ones.

“Despite have a higher minimum wage in our area, employers will also have to compete with any government benefits like unemployment offered to those who are eligible,” she said.

As to particular industries that are more inclined to raise wages in 2021, Robb says manufacturing likely will because of production goals.

“They have to do what is necessary to get people in the door,” he said.

Neither Rockwell nor Robb see any wage decreases on the horizon but possibly wage stabilization instead over the coming months.

“There could be some decreases as COVID-19 bonuses and other incentives are phased out,” Robb said. “But it is always very difficult to lower someone’s wages, so I think we will see more stabilizing of wages, but not decreases.”

With the focus on offering competitive wages right now, Rockwell says benefits have somewhat taken a backseat, but maintains that offering both high pay and benefits is the only way to attract and retain skilled workers.

“I think job seekers and employees are looking for a complete package,” she said. “We’re also seeing people start to consider employers that are essential businesses. Many want the security of knowing their employer will remain open should local, state or federal stay-at-home orders occur again, so this is a new attractive ‘perk’ we’re seeing in the marketplace.”

“With everything going on in 2020, most companies have not had the time to do anything new in this area,” he said. “If there are changes, it will probably be reductions in benefits as prices rise and companies try to stay profitable.”

There are still many unknowns about future economic conditions later in 2021, but rising wages to entice people off the sidelines for work is encouraging.

“Controlling the COVID-19 pandmic continues to be the largest factor standing in the way of a full recovery, so I’m very pleased to see businesses are optimistic for hiring to continue picking up,” Express CEO Bill Stoller said. “Businesses now need to take a look at what they can afford to hire, and retain, the best and brightest for their operations.”

Survey Methodology
The survey was conducted online within the United States by The Harris Poll on behalf of Express Employment Professionals between Nov. 16 and Dec. 7, 2020, among 1,002 U.S. hiring decision-makers (defined as adults ages 18+ in the U.S. who are employed full-time or self-employed, work at companies with more than one employee, and have full/significant involvement in hiring decisions at their company). Data was weighted where necessary by company size to bring them into line with their actual proportions in the population.

If you would like to arrange for an interview with Bill Stoller to discuss this topic, please contact Sheena Karami-Hollander, Director of Corporate Communications and PR, at (405) 717-5966.

About Express Employment Professionals
At Express Employment Professionals, we’re in the business of people. From job seekers to client companies, Express helps people thrive and businesses grow. Our international network of franchises offers localized staffing solutions to the communities they serve across the U.S., Canada, South Africa, Australia and New Zealand, employing 552,000 people globally in 2019. For more information, visit http://www.ExpressPros.com.