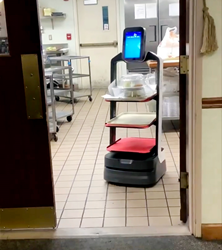 The robot is a great asset to the community and dietary team, as it doesn’t replace anyone but adds to the quality of service.

Heritage Woods of Ottawa is pioneering innovative technology in senior living with their new robot! This new robotic friend will provide enhanced engagement for residents and staff during the dining experience. Residents will soon be hosting a contest to come up with a name for the new dietary team member. This robot is a “runner”, so it will shuttle food from the kitchen to the residents. It's helpful because dietary staff can remain in the dining room and interact with residents.

The robot works in the kitchen and dining rooms by sensors that are in four zones on the ceiling that are invisible to the naked eye. The dining room is mapped out for the robot, and it stops in the zone of the table's location. It is on a timer, so when the time is up it returns to the kitchen. Also, if the robot needs more time to deliver the food you need to touch the screen to say that. There is a touch screen with the zones and activity right on the robot. It is very user friendly.

The cooks like the addition of the robot because the food gets delivered as soon as it's plated, which improves the service time. The robot has three shelves on it so that many tables and residents can be served at once, saving time and steps for the team members. They noticed that the cycle of food service is going very smoothly between beverages, order taking, and order delivery.

The screen on the robot can be programmed with pictures as well. Currently it has a picture of the front of the building but will add pictures of entrees and other dishes. The administrator at Heritage Woods of Ottawa, Peggy Morgan, says, “We will be using it to sing happy birthday to residents, I believe our next birthday is on November 3rd, so we will have to take a video then!”

Residents have been enjoying this new concept. They, of course, have many questions about the robot, and it has provided them with great entertainment. The robot sings, talks, and dances! It’s a great tool to the residents to have in their community.

Heritage Woods of Ottawa is the first Assisted Living/Senior care facility that RichTech Robotics has used. They have used them in restaurants before, but not for Senior Care until now. The robot is a great asset to the community and dietary team, as it doesn’t replace anyone but adds to the quality of service.