The Tennessee Aquarium will challenge guests to think differently about biodiversity hotspots when the new Island LIfe gallery opens on March 15. Visitors will go on an island-hopping adventure to meet bizarre and beautiful creatures that have developed in isolation over time. 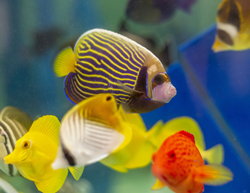 Tropical fishes from the Coral Triangle are among the colorful creatures in the Tennessee Aquarium's new Island Life gallery.

“Guests will feel like world travelers while seeing some pretty amazing animals. Islands are remarkably diverse locations, and in this gallery, we’re able to tell quite a few of these stories of biodiversity.” - Thom Demas, the Tennessee Aquarium’s director of aquatic collections.

On March 15, the Tennessee Aquarium will celebrate the opening of Island Life, a diverse new gallery that challenges how “islands” are defined while taking guests on a globe-trotting exploration of isolated ecosystems above and below the water.

“We’re excited for guests to experience these new exhibits. They’ll feel like world travelers while seeing some pretty amazing animals,” said Thom Demas, the Aquarium’s director of aquatic collections and life support systems. “I think visitors will be amazed by Flashlight Fish, and will love seeing many other species we haven’t exhibited previously. Islands are remarkably diverse locations, and in this gallery, we’re able to tell quite a few of these stories of biodiversity.”

A journey through Island Life will whisk guests around the world, from the frigid waters of the Pacific Northwest to the tropical seas off Southeast Asia to the teeming wilds of Madagascar. Some of the stops along the way include:

Visitors will be led on their exploration of this densely packed space by a scaly guide, Leon the Chameleon. Throughout the gallery, Leon will appear on graphics and interactive elements sponsored by Unum to pose questions that make guests — especially younger ones — question their understanding of islands and the special adaptations of the animals on display.

“I want people to come away with a whole new appreciation of islands and to expand their thought about islands and the animals that live on them,” says Jeff Worley, the Aquarium’s exhibit designer. “If we can start that when someone is three years old, then by the time they’re adults, they’ll be thinking differently about the world and maybe acting differently, too.”

Throughout Island Life, guests can deepen their experience through fun activities that bring to life many of the species’ unique adaptations via multimedia and physical engagement.

Visitors can speed up or slow down video footage of a Chameleon’s tongue in mid-flight, do their best Clownfish impression by weaving through oversized anemone tentacles, light up touch-sensitive Flashlight Fish and snap turtle-y awesome selfies atop an enormous bronze sculpture of a Galapagos Tortoise sponsored by Tennessee American Water.

These many interactive elements combined with the ever-changing, always-photo-worthy interaction of the animals mean return visits to Island Life are sure to offer up new memorable moments and bring to light overlooked details. Yearlong family memberships to the Aquarium include unlimited daily visits for two adults and five children and can be purchased at community.tnaqua.org/join.

After visiting Island Life, the fun continues with a pair of stunning giant-screen films at the Tennessee Aquarium IMAX 3D Theater. Showing through May 24, Oceans: Our Blue Planet features breathtaking footage displaying the amazing diversity and stunning beauty of the planet’s largest, least-explored ecosystem. All summer long, guests can join narrator Kristen Bell (Frozen, The Good Place) to catch up on un-bear-ably cute Giant Panda cubs being trained for reintroduction to the wild in Pandas 3D. Tickets, showtimes and additional information available at tnaqua.org/imax.