In a new study in the Journal of Oral Implantology, clinicians detailed and evaluated a new intra-oral treatment for sinusitis after maxillary sinus augmentation for ensuring long-term implant use. 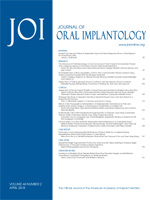 All seven patients greatly improved after intra-oral treatment and the infection was resolved, with some differences between groups in clinical outcomes.

Journal of Oral Implantology – After tooth loss due to disease, injury or other factors, dental implants improve quality of life. Maxillary sinus augmentation, a surgical procedure that grafts bone into the upper jaw, is often advised to create new scaffolding to support these implants. Unfortunately, sinusitis, an infection of the sinus, can occur after this surgery and cause implant failure. Some methods for treatment have been introduced, but they are focused on endoscopic sinus surgery, in which infected sinus tissues and the implant are removed. In a new study in the Journal of Oral Implantology, clinicians detailed and evaluated a new intra-oral treatment for sinusitis after maxillary sinus augmentation for ensuring long-term implant use.

Clinicians from Kyung Hee University, Hangyang University, and a private practice in Seoul, Korea, conducted maxillary sinus augmentation, followed by dental implant installation, on 307 patients from 2003 to 2017. Based on clinical symptoms (e.g., pus, severe swelling, and nasal obstruction), seven of these patients (18 implants total) were diagnosed with sinusitis, caused by sinus graft infection. The patients were given a one-week course of antibiotics and were then split into three groups (I, II, and III) for intra-oral treatments involving different timings for an incision and drainage (I&D) step that removed the infected particles and allowed natural drainage. Immediately after manifestation of clinical symptoms, I&D was performed on group I. Additionally, groups II and III received antibiotic treatment one week and two weeks before I&D, respectively. Afterward, all patients were given antibiotics for two weeks. After two months, further follow-up exams and surgeries were conducted as needed.

All seven patients greatly improved after intra-oral treatment and the infection was resolved, with some differences between groups in clinical outcomes. Although not significant, patients in group I healed quickest, followed by groups II and III. In group I, all sinus grafts were maintained and all implants (nine of nine) survived. In group II, two of four implants needed to be replaced after intra-oral treatment, after which, all implants performed well. In group III, additional bone grafting was needed in one patient and all four implants needed replacing but were well maintained afterward. Overall, intra-oral treatment conducted expediently resolved sinusitis and allowed patients to retain implants for the long term.

Because of the positive outcomes, the authors highlight that sinusitis after sinus augmentation surgery in these cases resulted from an infection caused by the sinus graft itself and not a problem of the sinus membrane. Thus, they reason that treating sinus graft infection with endoscopic sinus surgery will not resolve the infection and that it should be considered only when the infection has progressed to secondary locations.

About the Journal of Oral Implantology
The Journal of Oral Implantology is the official publication of the American Academy of Implant Dentistry and of the American Academy of Implant Prosthodontics. It is dedicated to providing valuable information to general dentists, oral surgeons, prosthodontists, periodontists, scientists, clinicians, laboratory owners and technicians, manufacturers, and educators. The JOI distinguishes itself as the first and oldest journal in the world devoted exclusively to implant dentistry. For more information about the journal or the society, please visit http://www.joionline.org.