The NOGO List allows consumers to see what companies have been up to during the Coronavirus pandemic -- good or bad, moral or immoral -- and make informed decisions about which companies deserve their business. 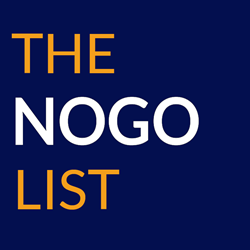 The NOGO list is not a standard review site. We are not concerned with the quality of service or product that a company provides in and of itself. Rather, we are concerned with companies' behaviors as citizens of their communities and of the world.

The NOGO List was created by a small Boston based team as a way for consumers to make informed decisions on which companies deserve their business. The NOGO List consolidates the immoral happenings of major businesses into one easy to view list with succinct bullet points and easy to follow sources.

The idea for The NOGO List was developed during the height of Covid-19. The team behind ‘the list’ was frustrated with the amount of corporate greed and employee mistreatment stemming from companies who chose to put profits over people. With no real consequences on the horizon for these companies, The NOGO List team sought to create a simple tool that would allow consumers to take matters into their own hands. Further, they believed that the negative actions of these companies should be public, and should not simply disappear with the next news cycle.

Chris Hawes, designer of The NOGO List, stated “Our goal is to present as accurate a picture of each company as we can, so that consumers can make their own decisions. The NOGO list can be used on its own, or as a starting point for further research.” Lillien Kenyon, Content Editor and Chief Marketer, added “The NOGO list is not a standard review site. We are not concerned with the quality of service or product that a company provides in and of itself. Rather, we are concerned with companies' behaviors as citizens of their communities and of the world.”

Companies have been added to The NOGO List for instances such as ignoring orders to close and telling employees to simply “put plastic bags over their hands for protection” or for giving out large bonuses to top execs just days before securing a PPP loan meant for struggling small businesses.

If you know of a company that should be added to The NOGO List, please reach out to the site owners here.

About Unleashed, LLC
Unleashed, LLC is a Boston-based technology company that specializes in creating websites and smartphone applications to provide users with the information they need for daily decisions. The company is best known for creating the popular travel site TaxiFareFinder.com. TaxiFareFinder, released in 2007, is an online resource for all things related to taxis and rideshares. TaxiFareFinder is best recognized for its groundbreaking, location based, taxi and rideshare fare calculators.