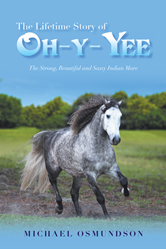 Author Michael Osmundson has recently released his new book, “The Lifetime Story of Oh-y-Yee: The Strong, Beautiful and Sassy Indian Mare”, a western novel about a dapple-gray mare owned by a formidable Crow warrior named Awanatu. Oh-y-Yee feels angered by the way Awanatu treats her and is determined to rid herself of him as soon as possible.

The story is observed by a bald eagle that flies overhead, allowing readers to enjoy the shifting perspectives of a Crow war party and wagon train settlers of Norwegian descent who are looking to start over in the west.

As the Norwegian group trespasses through Crow holy land on their way to Utah, the Crow war party is eager to track and kill them. However, a mountain man named Big Al who is familiar with the land and several tribes joins the group as winter approaches. Vivid details about the flora and fauna of the land paint a picture of natural beauty and a strong sense of living history.

“While entertaining, the book addresses the realities of frontier life,” Osmundson said. “From hunting for food to gathering firewood, these everyday tasks of survival are often overlooked by people in modern times. I hope readers are transported out of the fast-paced present into a time gone by.”

One Amazon reviewer sings praise for “Oh-y-Yee”, saying they “loved the adventurous storyline! Great for all ages!”

Lovers of horses, nature and history will love “The Lifetime Story of Oh-y-Yee”, especially the western setting with diverse characters and points of view.

About the author
Michael Osmundson is the owner and general manager of Creative Genetics of California. A self-taught genetic engineer, his work involves genomic testing, embryo transfer, sale of sperm and breeding program design. Mike’s company founded the Procross system of crossbreeding dairy cows, which is the first program to succeed and is now the only crossbreeding program worldwide that is proved profitable by university trials and approved by the Journal of Dairy Science. As a child, he learned how to hunt and live off the land, developing an admiration for Native American culture.