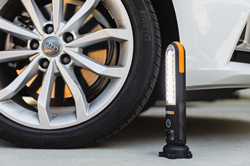 The portable starter jumps gasoline-powered car engines up to 4.0 liters and diesel car engines up to 3.0 liters. Fully charged, it can make 30 jump starts before recharging is needed. Its battery status indicator has four LED charge levels. It also jumps motorcycles and other machines with 12V batteries.

The jumper comes with battery charging cables and a cigarette/power port cable for charging in vehicles. The jumper has a side power panel with a rubber flap enclosure. The power panel reveals multiple charging stations, including a plug-in to charge the jumper, two USB ports to charge small devices, a second plug-in charging port and plug-ins for the jumper cables.

It takes 8 hrs. to fully charge the jumper. Charge it using the cigarette/power port cable or through the included USB cable and a cell phone or tablet. The WORX Multifunction Jumper has five LED light options in various configurations, ranging from a solid white LED worklight to an emergency solid red or flashing red LED light. The jumper also doubles as a flashlight with a solid beam or flashes. Unlike incandescent or CFL bulbs, LED lights do not get hot and stay cool to the touch.

The tubular-shaped Multifunction Jump Starter is constructed of polymer resin with a clear plastic lens that houses the LED lights. It has a built-in retractable ribbed hook for hanging under a vehicle’s hood, J-hook in the garage, in a closet, on a tree branch or other site. The jump starter stands on end and has a magnetic platform base. It can be set on top of a vehicle, metal workbench, tool chest and roll-away cabinet or other metallic surfaces.

The water resistant, 12V jump starter weighs 1.05 lbs. Its auto-start peak current is 500 amps and its operating temperature range is 1.4º F to 140° F. The jump starter has reverse polarity protection, meaning it protects the jumper if the battery cables are connected to the wrong terminals.

WORX 12V Multifunction Jump Starter with LED Light is handy under the hood.