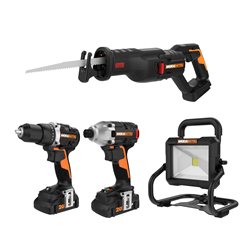 Unwrapping a holiday gift that contains a new WORX® Nitro 20V, 4-pc. Combo Kit is sure to boost the creative enthusiasm, as well as project capabilities, of both DIY newbies and experienced handypersons. In the kit are the versatile WORX Nitro 20V 1/4 in. Impact Driver and 1/2 in. Drill-Driver Combo; WORX Nitro 20V Reciprocating Saw (tool only) and the WORX Nitro 20V LED Work Light (tool only).

The Nitro 20V drill-driver is compact and nimble. It has a variable-speed trigger and a comfortable, rubber overmold grip. The built-in LED light illuminates the work area when the trigger is pressed. The LED light also serves as an overload protection alert.

Joining the drill-driver in the combo is the WORX Nitro 20V Impact Driver. It’s the go-to tool when it comes to tough DIY jobs, especially those with repetitive assembly work. It’s an asset for building decks, outdoor play structures, benches and picnic tables, among other projects. The driver also is handy for removing stubborn or rusted fasteners.

The Nitro 20V impact driver has a ¼-in. chuck, and only accepts hex-shanked bits. These six-sided bits are gripped evenly on all sides to prevent slippage.

An impact driver quickly sinks a variety of fasteners with rotational force (impacts), minimizing stripped screw heads. Because concussions are channeled to the fastener, there is no residual effect on the user’s wrist or forearm. And with 2300 in./lbs. of torque, the driver can handle the most demanding jobs.

The WORX Nitro 20V impact driver weighs 3.31 lbs. (with battery), and is powered by the same 20V 2.0Ah MAX lithium-ion battery that powers the Nitro 20V Drill-Driver. The built-in LED light illuminates the work area when the trigger is pressed. The impact driver has a variable-speed trigger and a comfortable rubber overmold grip.

The reciprocating saw is a great choice for both professionals and do-it-yourselfers who tackle a range of home improvements, repairs, renovations and demolition, as well as major remodeling projects. It’s also good for yard work, such as trimming and pruning overgrowth, removing dead limbs and cutting roots.

The reciprocating saw’s brushless motor is 25 percent more powerful, runs 50 percent longer, and delivers 10 times longer life than conventional brushed motors. The variable speed saw operates at 0-3,000 (no-load) strokes-per-minute (spm) and has a 1-3/16 in. blade stroke and cutting capacity of 11-3/4 in. in wood and 1/2 in. in steel.

A pendulum selector knob adjusts blade action, according to the workpiece material and thickness. The “on” position provides reciprocating action for making fast cuts in soft materials and cutting with the wood grain. The “off” position is preferred for finer cutting in thin work pieces and cutting metal.

Rounding out the WORX Nitro 20V 4-pc. Combo kit is the WORX Nitro 20V LED Work Light (tool only). This work light generates 1500 lumens, which is the equivalent of a 100 watt light bulb. It’s a substitute for the old incandescent trouble light and its big advantage is it burns cool.

The cord free, go-anywhere 20V Work Light makes any project where light is needed easier. It weighs 5.6 lbs. with battery. A built-in hook can be used to hang the work light from the hood of a vehicle to see into an engine compartment, a closet rod to paint its interior, an I-beam in the basement when installing ceiling panels, and many more hook-hanging applications. The work light also can be mounted to a conventional tripod.

The portable LED work light is handy in basements, crawl spaces, attics and garages, behind appliances, camping, boating, RVing, outdoor projects and events, and other activities.

The work light is housed in a tubular frame with a rigid foot plate as its base. The frame incorporates a comfortable foam grip, which also serves as a carrying handle. The high-performance, tempered-glass LED light’s frame rotates north to south 360º. The light powers on by a push-button on/off switch. When using a WORX 20V 2.0Ah battery, it will run for two hours continuous use.