The New York Film Academy (NYFA) Community had a lot to celebrate while watching the 70th Primetime Emmy Awards on Monday, September 17, 2018. 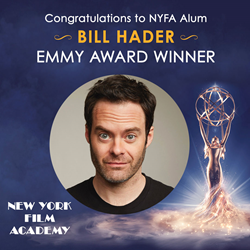 The New York Film Academy (NYFA) Community had a lot to celebrate while watching the 70th Primetime Emmy Awards on Monday, September 17. One of the big winners of the night was HBO’s new comedy, Barry, starring Bill Hader, a NYFA workshop alum, and Henry Winkler, who both received acting Emmys. Henry Winkler was a guest speaker at the Los Angeles campus (you can listen to his guest speaker event on the NYFA Podcast, The Backlot).

Other members of the NYFA community involved with this year’s Emmy Awards include Emmy-nominated alum Issa Rae (Insecure) and alum Francesco Panzieri, who has worked on Emmy-nominated Westworld.

Netflix made headlines when it broke HBO’s 17-year streak of most nominations, with 112 total, to HBO’s 108. This continues the cultural dominance in longform storytelling that started when COO Ted Sarandos, who spoke with NYFA students earlier this year, shepherded Netflix into the future of original content.

The New York Film Academy congratulates all Emmy nominees and winners, including our Alumni and community for their success this year!