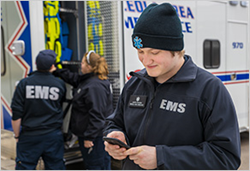 'The staggered alerts allow us to set a process for coverage, and when the spot is filled know it was done so in a fair and precise manner.' -- Asst. Chief EMS, Dan Hull, Community Volunteer Fire Dept., Houston, TX

The newest enhancement to Aladtec's scheduling and workforce management software allows managers to automatically build and cycle through a list of members, offering only the appropriate individual the opportunity to work an extra shift.

Entitled "staggered Coverage Notifications" in the system, the feature "allows services to easily stagger their Coverage Alerts, automatically ensuring compliance with union/service rules for who to notify in what order," said Product Manager Jaimie Hammond, a principal architect of the new functionality, Hammond described the breakthrough as "a powerful tool, and probably the most complex we've ever built."

Aladtec's 12-member engineering team has been working on the concept on and off for nearly seven years.

Hammond explained that rotational overtime is the process of cycling through a list of members, offering each person, one at a time, the opportunity to work an extra shift. For example, an individual with the most seniority or least overtime has the right of first refusal before the shift is offered to a member with the second-most-seniority or second-least-overtime, and so on.

Aladtec support staff had developed workarounds for agencies that require such functionality. Still, they were labor-intensive, error-prone, and sometimes didn't work for services with extensive overtime, complex rules for sorting the list of members to notify, or strict union rules about notifications.

Dan Hull is Asst. Chief of EMS, with the 217-member Community Volunteer Fire Department, on the western edge of Houston, TX. The agency serves a diverse urban/suburban population of about 108,000 from four stations. Staffed around the clock with part-time firefighters and volunteers, they answered nearly 9,000 calls last year or about 25 per day.

Hull said the new Aladtec function allows for "decentralized command," enabling supervisors to find coverage and approve it without having to contact Hull if a member is going to be on overtime.

"It frees up my time to accomplish my tasks and not have to oversee the supervisor and the schedule daily."

Before staggered Coverage Alerts, notifications were sent to all staff, and the shift was usually awarded to the first respondent. That sometimes meant "paying overtime when we didn't need to," said Hull.

Since Community Fire is a combination department, the improved "alert function allows us to send a notification to the volunteers first, then to those members with the fewest hours to most hours worked.

"The staggered alerts allow us to set a process for coverage, and when the spot is filled know it was done so in a fair and precise manner. Even if it means overtime, we know the members were notified in the specific order we want," said Hull.

Another Aladtec customer enthused about the new feature is Warwick Community Ambulance Association of Lititz, PA, whose 38 members respond to about 2,500 calls annually.

The old practice of notifying all qualified staff members simultaneously made it difficult to dole out OT fairly, said operations manager and paramedic Christopher Buchmoyer.

"At Warwick, staff are restricted to 48 hours or less per week, with no more than 24 continuous hours, and a mandatory eight-hour break between shifts. This prevents one or two members from working excessive overtime and significant provider fatigue," he wrote in an e-mail exchange.

If and when union members agree, the new functionality "will eliminate the numerous phone calls we will have to make and the need to update the voluntary list manually."

Previous, Dorr and coworkers "kept a list in Excel, which we have to update and sort manually after employees work an OT shift. We made phone calls to members on top of the list. If there's no answer or they changed their mind, we called the next on the list…and so on."

"If I can convince the Union to accept some changes, then definitely yes!," said Dorr.

Aladtec was founded in 2005 and is headquartered in River Falls, Wis. The firm provides services to more than 2,300 law enforcement, fire, EMS, dispatch, and healthcare organizations across the U.S. and Canada. More than 147,000 people use the system regularly, and nearly a billion hours have been scheduled using Aladtec.