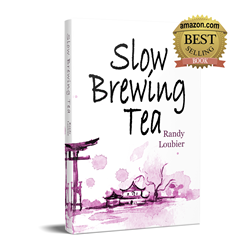 An epic spiritual adventure through another culture

In every election cycle Americans evaluate what matters to them. Whether you are part of the Latino vote, the women vote or the African American vote, cultures across state lines in every city in our country are being tested. It doesn’t matter if you want to defund the police or bring back Big 10 Football or you’re currently marching in a protest. Every American voting this year at the ballot box is facing a culture war, and a decision of our conscience.

Slow Brewing Tea builds a bridge between worlds. It shows firsthand how to find common ground and build together. Bestselling Author Randy Loubier states, “The book started out as an epic spiritual adventure but shows one man’s journey into an entirely different culture. Through that process, we can all learn.”

The transition of American culture is ever changing. The role of the police officer, once a respected position in our town’s streets, is getting completely redefined. So are the cultures of our own neighborhoods where we live. It takes becoming a brave soul to put out your own yard signs to avoid an argument with someone walking by.

Slow Brewing Tea helps shape how to enter an unknown culture and build an effective bridge of understanding: walking in love not hate, listening before we think we know an answer, adapting to a pre-existing culture and building relationship.

Listening before speaking may produce peace in our streets than riots and hate. Being a bridge builder, like Isaiah in Slow Brewing Tea took many visits, many conversations and even many intense moments, but in the end Isaiah’s path took a different turn for the good.

In this election cycle, how important are the current culture wars? Becoming a bridge builder or bridge destroyer?

The current street terrorism is said by local authorities to “send a message” of the escalated culture wars coming to our own front door. It was the Christians who peacefully abolished the slave trade (1700’s), peacefully organized and ran the underground railroad (1800’s) and peacefully protested segregation (1900’s).

What will God have Christians do in the 2000’s to build new intercultural bridges? The Bible says “God is love.” So, His answer must include love—His kind of love—the kind of love that doesn’t agree with human-ness but has a committed stance toward wanting the best for ALL our neighbors.