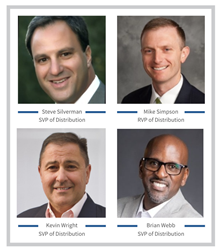 NFI has experienced explosive growth in the distribution space over the past decade, which is now the largest segment of our business generating over $1 billion in revenue.

To further position the company for continued growth, Silverman will be responsible for the central U.S. region and Canada, overseeing NFI’s project management team and customer start-ups, while Simpson will manage NFI’s cross-dock operations and expand the company’s reverse logistics solutions. Wright will oversee the company’s eastern distribution operations and Webb will focus his efforts on the western region.

With more than 50 million sq. ft. of warehousing space and 350 locations across North America, NFI’s distribution footprint spans e-commerce fulfillment centers, cross-docks, transloading facilities, multi-temperature distribution centers, and customs exam stations. In addition to leveraging state-of-the-art warehouse management systems (WMS) technology, the company continues to innovate and has implemented robotics and automation within its warehouses to generate cost savings and improve efficiency. In addition to organic growth, NFI has also expanded its distribution capabilities and geographical presence through the acquisitions of both California Cartage Company and Dominion Warehousing in 2017.

“NFI has experienced explosive growth in the distribution space over the past decade, which is now the largest segment of our business generating over $1 billion in revenue,” said Kevin Patterson, President of Distribution at NFI. “In addition to investing in innovative technology and equipment, NFI continues to grow its warehousing business by bringing strong talent to the team to support future growth and bring greater value to our customers. We are thrilled to welcome Steve Silverman and Mike Simpson to the NFI family and look forward to Kevin and Brian’s contributions within their new roles.”

Prior to joining NFI, Silverman held a variety of positions ranging from sales to operations and engineering, and was most recently the SVP of Supply Chain for Bargain Hunt, a discount retailer. Previously, Silverman held the positions of SVP of Integrated Solutions & Implementations and SVP of Operations at Geodis, and was the CEO of Axion International, a green technology infrastructure business. Simpson joins from FedEx Supply Chain after 17 years, where he was most recently the VP of Operations with a team of over 4,400 employees after a previous career as a United States Army Officer. Wright’s role with NFI has continued to evolve over the past 22 years, in which he has expanded the distribution east region, while Webb has transformed the distribution west region in his four years at NFI.