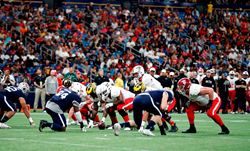 Ninety players from the 2020 East-West Shrine Bowl™ are now signed with an NFL team. There are more than 300 Shrine Bowl alumni playing prominent roles on all 32 NFL teams.

These numbers currently represent players on a 53-man roster, practice squad and reserve.

“It’s a really strong number to have more than 70 percent of our 2020 East-West Shrine Bowl roster currently on NFL payrolls as we head into the third week of the season,” East-West Shrine Bowl executive director Bob Roller said. “These young men work so hard to achieve this dream, and it’s great to see all of these stories each season.

Fourth-round draft pick Kevin Dotson made his NFL debut in week two, and he is the only rookie offensive lineman with 10 plus pass-block snaps and zero quarterback pressures allowed.

James Robinson, who was the Offensive MVP in the Shrine Bowl, went undrafted and now is on a 53-man roster. Robinson currently is leading rookie rushers in week two with 102 yards, a touchdown and a 28-yard pass reception. He was the fifth for the week and eight overall for the year.

About the East-West Shrine Bowl

The East-West Shrine Bowl is the premier college all-star football game in the nation. Since 1925, the game has benefited Shriners Hospitals for Children® and its mission to provide care for children with specialized medical needs, in a compassionate, family-centered environment.

With more than 300 NFL scouts, coaches and agents in attendance, the East-West Shrine Bowl is a pivotal training and interview event for top college athletes seeking careers in professional football. For more information, please visit shrinebowl.com.