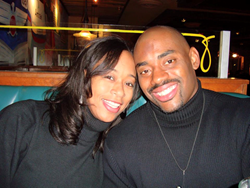 The lung cancer survivor-advocate who raises the most money will join Team Draft at the Super Bowl.

Chris Draft faced some tough opponents during his 12 years in the NFL, but nothing prepared him for the news he and girlfriend, Keasha, received when Keasha, a never-smoker, was diagnosed with lung cancer. Despite long odds, Chris and Keasha made a choice to fight back, and 8 years ago today, standing hand-in-hand, they launched Team Draft, as part of the Chris Draft Family Foundation at their wedding. Keasha died a month later.

“When Keasha was diagnosed, she knew she had two choices: she could give up and accept death or she could live each day to the fullest,” says Draft. “Keasha was fighter, so she chose to give it everything she’s got,” he says.

“On our wedding day, Keasha and I made two commitments: one to each other and one to the lung cancer community,” Draft continues. “Keasha knew our second commitment couldn’t be accomplished without a team, so instead of gifts, she asked our guests to join the fight by donating to our foundation,” Draft explains. Those donations became the seed money for Team Draft, helping launch its Campaign To Change The Face Of Lung Cancer.

“Keasha is proof that anybody can get lung cancer; it’s not just a ‘smoker’s disease’,” says Draft. “And if you believe anybody can get it, you have to be committed to everybody,” Draft explains. “Keasha knew that our commitment had to be about more than just her; it had to be about the entire lung cancer community,” he says, adding “for Keasha, the fight wasn’t about ‘me,’ it was about ‘we.’”

From the beginning, Team Draft has been on a mission to identify and support individuals and institutions who, like Keasha, choose to give it everything they’ve got to fight lung cancer—individuals and institutions willing to stand with Team Draft and fight not only for themselves, but for their communities. For Team Draft, it has always been about “we” and not “me”—just as Keasha intended.

Team Draft’s Campaign has taken it to hundreds of cancer centers around the world in search of institutions willing to talk about the research they are doing and how they are changing lives. Through its Survivor At Every Stadium initiative, Team Draft, working with likeminded institutions and organizations, identifies survivors who, like Keasha, choose to stand up for themselves and the millions living (or who will be diagnosed) with lung cancer. Once Team Draft identifies these “survivor-advocates,” it provides them with the opportunity to use Team Draft’s unique platform to share their stories at NFL, NBA, MLS, NHL, and college football games, weaving a broader narrative about the true nature of lung cancer and the hope that now exists.

Team Draft’s annual Lung Cancer Survivors Super Bowl Challenge brings it all together. In this one-of-a-kind fund raising challenge, survivor-advocates compete to raise funds for awareness and research. The survivor-advocate who raises the most money will join Team Draft at the Super Bowl. The runner-up receives a trip to the Pro Bowl. The third place finisher will join Team Draft at the Taste of the NFL—a food and wine festival held the night before the big game where guests savor dishes prepared by top chefs while visiting with NFL legends.

In addition to raising awareness, the Super Bowl Challenge raises funds for other lung cancer organizations and treatment centers. Because Team Draft’s Campaign has always been about “we” and not “me,” participating survivor-advocates raising more than $5,000 may commit 90% of those funds to a lung cancer organization or cancer center of their choice.

Team Draft is also challenging individuals to help fulfill Chris and Keasha’s commitment by joining its Campaign by donating to the Chris Draft Family Foundation at http://www.chrisdraftfamilyfoundation.org or supporting a participating survivor-advocate in the Super Bowl Challenge at https://www.crowdrise.com/o/en/campaign/2020-lung-cancer-survivors-super-bowl-challenge.

“It takes at team to tackle cancer, and we need your help,” Draft adds. Will you choose to stand up for your community?

Team Draft is an initiative of the Chris Draft Family Foundation dedicated to increasing lung cancer awareness and research funding. To learn more or to donate, visit http://www.teamdraft.org.