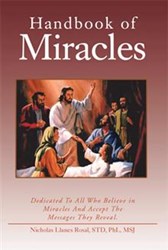 Through author Nicholas Llanes Rosal’s life’s experiences, guided by his philosophical, theological, and spiritual studies comes "Handbook of Miracles", a book that showcases God’s awesome power that makes extraordinary events possible and defines the happenings in the world that cannot be explain by mere principles of science or the potency of nature. Those events, explainable only by divine intervention, are considered as miracles.

Every miracle conveys a message – a salvation-related message. Miracles are not meant to entertain but to deliver messages God wants people to know and live by for man’s salvation. Christ’s resurrection, for instance, conveys the message that He was the Son of God, sent down by the Father and died to redeem mankind from sin. People live in different times and in various places, thus, miracles happen correspondingly as well to reveal the messages for all people in every generation. Even the saints’ holy lives help explain the messages of salvation conveyed by their miracles.

"Handbook of Miracles" explores the nature of miracles, reason behind them, and cites numerous miracles from biblical beginnings, to Christ’s days, the apostolic era, and the centuries of saints to the modern times. One way or another, miracles happen and will happen to everybody. Miracles strike instantaneous fear, awe, wonder, and admiration, which is all part of divine psychology. God attracts man’s attention and then reveals His message. He uses miracles as a medium to gain man’s attention before He delivers His message.

In today’s society where materialism, immorality, and hate tend to prevail, it is important to constantly remind people of the existence of a God to whom everybody owes his/her life wife. The messages in this book serve as a warning to all not to ignore that reality – the reality of God’s awesome power that can wipe out lives, and the reality of God’s love that beckons man back to the road toward his ultimate destiny: eternal happiness in heaven.

In today’s society where materialism, immorality, and hate tend to prevail, it is important to constantly remind people of the existence of a God to whom everybody owes his/her life with. The messages in this book serve as a warning to all not to ignore that reality – the reality of God’s awesome power that can wipe out lives, and the reality of God’s love that beckons man back to the road toward his ultimate destiny: eternal happiness in heaven.

Commenting on the content of the book, the Dr. Rev. Alfredo Balinong, S.J. of New York City, said, "This book points out the remarkable meaning of miracles: Like the blind Bartimius who followed Jesus after he received his sight, Jesus calls believers and non-believers alike to accept His call to follow Him to Calvary and receive the power of His cross."

The Rev. Albert Pace, O.P., Las Vegas director of the Thomas Aquinas Newman Center, said, "I endorse this book to all. It explains the theological and scriptural relevance of miracles in our times."

Gilbert Streeter, a devout Catholic who has become familiar with the book, said, "Through faith and understanding, it is exhilarating to read this book. It shows how so many saints have been chosen by God to display His love to us through their miracles."

Dr. Nicholas L. Rosal taught Christology at St. Francis College in Brooklyn and moral theology at the former Brooklyn campus of St. John’s University. As an adjunct, he taught contemporary moral problems at Loyola University in Chicago while working toward his master’s degree at the Medill School of Journalism. A preacher for the National Propagation of Faith under Bishop Fulton J. Sheen, he gave retreats to nuns and recollection to priests.

He earned (magna cum laude) his STD and PhL degrees at the Pontifical Seminary of the University of Santo Tomas in Manila. In addition to writing numerous articles about religious, educational, and government issues, he has published pamphlets on comparative religion and written books ,including The Jerusalem Journal (2009), a continuous life story of Jesus (Claretian Publishing House, Manila), Learning an Exotic Language: Ilokano (1980), a linguistic analysis of one of the major Philippine native languages (Paragon Press, Manila) and The Unjust Position of the Church in the Philippine Constitution (1960), study of the state relations in the predominantly Catholic country in Asia (University of Santo Tomas Press, Manila).
He has translated from English into Ilokano the Catechism of the Catholic Church (822 pp), now being reviewed by the Archbishop of Nueva Segovia (Vigan).

Before coming to the United States, he taught Religion, Latin, and music at the Archdiocesan Minor Seminary in Vigan, worked in parishes, and held briefly the position of chancellor of the Nueva Segovia Archdiocese. After receiving permission to leave the ministry, he went to work for Bell Labs in Murray Hill, N.J., and the Perth Amboy Board of Education, N.J., as education advocate and, later, as principal of the Adult High School.

Dr. Rosal, one of eleven siblings, was born in the Philippines to devout parents (Alfonso, a lawyer, and Matilde, a school teacher). He has three sons (Anthony Nicholas, Patrick, and Mark) from his marriage to Mimi (deceased) and a step daughter (Christine) by his marriage to Thelma.

Msgr. Armando Perini, the author's former pastor, Edison, N.J., stated, "The book is a valuable guide on how to understand what true miracles are and how they relate to the ultimate purpose of our existence -- eternal life in heaven."