The show will feature Deepak Chopra in a starring role, and Nicole Brandon will serve as the one-air host in the pilot, interviewing the prisoners/parolees and the heads of the Amity Foundation. 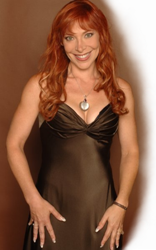 Nicole Brandon, Founder and CEO of Artistry in Motion

Nicole Brandon, CEO and Founder of Artistry in Motion, has been asked to produce a new and exciting TV pilot called “Mental Prison.” Created in conjunction with the Amity Foundation, the show is a remarkable program and window into a new realm of consciousness. Through sound (singing) meditation, the prisoners change their focus to inner peace and caring for the world.

The show will feature Deepak Chopra in a starring role, and Nicole Brandon will serve as the one-air host in the pilot, interviewing the prisoners/parolees and the heads of the Amity Foundation. The featured artist and creator of the show is Michel Pascal, an inspiring musician, composer, filmmaker, writer and meditation teacher whose programs are in Fortune 500 companies worldwide.

The show also stars and features Myron McKinley, music director of Earth, Wind & Fire and his trio Stacey Lamont Sydnor on drums, Ian Martin on bass and sound engineer Claudio Cueni. The theme song "The Beauty of the World" will be heard in the pilot and is based on the inspiring poem written by Ena Love. Also included is the talents of the exceptional singer, composer, videographer, and author Nina Porter. During the filming the band created an upbeat Music Video “Proud of You” with Michel Pascal, Myron McKinley, Verdine White and Laurent Robin.

A Spanish version of the show is available featuring actress Danielle Barbosa ("Argo," "Bold and the Beautiful," "Temporary Insanity") who is best known for her award winning, portrayal of Dolores Huerta in Ed Begley Jr’s "Cesar and Ruben." The Spanish version highlights Juliana Klinkert as she leads the Meditation Session in Spanish. Juliana has the room swept away by her centered peace and glorious imagery. The parolees faces and demeanor change before your eyes and on screen she is captivating and mesmerizing at every turn.

Nicole Brandon is a powerhouse and known around the world for her extraordinary versatility in touching peoples lives. On and off the camera her name is synonymous with success and change creation around the globe. Nicole Brandon is the Executive Producer and one of the Lead Actors in the New Sit-Com “Temporary Insanity” while simultaneously filming “The Offering” a new Feature Film, in which she stars with French mega blockbuster actress, Gabriella Wright.

Nicole is known internationally for her five popular and highly success radio shows, "Unlimited Life," "Hour Glass Bride," "Parenting Today," "Keys to Success," and "Happily Ever After." Her online segments “Ready to Look Younger” compel audiences to tune in and to learn the secrets, hints, tools and keys to eternal youth and happier and healthier living.

Nicole is a New York Times Bestselling author having penned 32 books and numerous television programs. Today you will find her as a Producer for Goliath Films and Media Holdings Inc. To add to the recipe of success, Nicole was inducted into the “Martial Arts Hall of Fame” and she was inducted into the “Elite Black Belt Hall of Fame”. Nicole is a “National and International Title Winner” in the World of Dance and her “Hotel Workout Videos” can be seen in 5 Star Hotels throughout the globe.

Nicole is most highly recognized as a Philanthropist and Humanitarian titled the “Ambassador of Kindness” around the world. Nicole has been “Knighted” for her Humanitarian work and most recently she received the “Presidential Volunteer Service Award” for her Humanitarian efforts, service and love. She is a proud member of the Transformational Leadership Council (The Secret) and a she is a chosen carrier of the World Peace Flame. On May 25th “The USA Martial Arts Hall of Fame” will name her “International Actress of the Year” recognizing her work and “Motion Mastery in Motion Picture Arts and TV”.

Nicole Brandon owns and operates Nicole Brandon Worldwide, Unlimited Life, The Hotel Workout, Hour Glass Bride and “Artistry in Motion”, a phrase she coined, which of course, is the way, she lives.