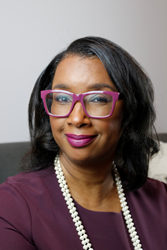 Nicole Robinson has been named CEO of YWCA Metropolitan Chicago after a four-month nationwide search, the organization announced today.

Robinson will transition from her role as Chief Partnership and Programs Officer at the Greater Chicago Food Depository where she has driven that organization’s lauded response to COVID-19 and helped to transform the emergency food systems on the South and West Sides of Chicago. Robinson previously worked at Kraft Foods and Mondelez International in finance and ultimately led the corporate foundation for both organizations, investing in family and community well-being in emerging markets from Brazil to Ghana. She has worked with the United Nations World Food Programme and variety of multinational NGOs, including CARE, Save the Children and INMED Partnerships for Children.

“We believe we’ve found the perfect person to continue the YWCA’s growth and evolution to an agile and innovative social enterprise,’’ said Board President Joyce Winnecke, who also chairs the Transition and Search Committee.

“Nicole understands people, programs and policy. She is a potent blend of strategist, advocate and relationship builder,’’ Winnecke said.

Robinson is excited to continue advancing the issues about which she’s passionate.

“As a fierce advocate for women and justice I’m honored to join the YWCA, building on a rich legacy of empowerment while reducing racial and economic inequities,” Robinson said. “I’m motivated by the ambition and humanity of the mission, but more important I’m inspired by the resiliency of the women and families who turn to the YWCA for family supports, economic opportunities and collective healing.

“Our pathway beyond the pandemic begins with people, and I look forward to standing in solidarity with the YWCA team, community, government, and business partners as we imagine a collective future together,” Robinson said.

Robinson will join YWCA Metropolitan Chicago in January 2022. She assumes the role from Interim CEO Shelley Bromberek-Lambert, appointed in July 2021 when Dorri McWhorter stepped down as CEO.

“Nicole brings the ideal mix of experience and a strong record of accomplishments to lead YWCA Metropolitan Chicago through its next chapter,’’ Bromberek-Lambert said. “I look forward to working with Nicole as we continue to bring innovative approaches to our mission of eliminating racism and empowering women.’’

Robinson was the unanimous selection of the YWCA Metropolitan Chicago Board of Director’s Transition and Search Committee. Business and civic leaders who also are current or former members of the YWCA Metropolitan Chicago Board comprise the committee: Nicole Johnson-Scales, Irina Konstantinovsky, Cynthia McCafferty, Kim McGarry, Diane Randolph, Edward Taylor, Paroo Uppal and Winnecke. Aligned with the YWCA mission of eliminating racism and empowering women, the committee undertook a comprehensive search with the support of Korn Ferry, identifying 320 potential candidates and screening 44 potential candidates, 75 percent of whom were women of color.

Robinson grew up on Chicago’s South Side, experiencing poverty and other systemic and structural challenges first-hand. A product of Chicago Public Schools, Robinson earned a bachelor’s degree in finance from DePaul University and an MBA from the DePaul University Kellstadt Graduate School of Business.

Dedicated to improving the lives of people facing poverty and inequity, Robinson has worked as a volunteer for a number of organizations including Chicago Foundation for Women, Deborah’s Place, Center for Economic Progress, the Chicago Alliance for Collaborative Effort and Court Theatre. As a part of her engagement with Chicago Foundation for Women, Robinson founded the South Side Giving Circle, a celebrated program convening women philanthropists committed to the economic, social and political power of Black women and girls.

At the Food Depository, Robinson has led teams responsible for strategy and innovation related to programs connecting families to food, public benefits, employment, while also leading public policy, research, and evaluation efforts. She has been the architect and champion of the Food Depository’s organization-wide commitment to racial equity and justice. In partnership with the Chicago Mayor’s Office, Robinson co-created the Food Equity Council, designed to reduce inequities across the food system.

The Board expressed its gratitude for Bromberek-Lambert’s work during the transition.

“We are fortunate to have an exceptionally strong leadership team, and with Shelley as Interim CEO, the organization continues to deliver impactful and innovative programs,’’ Winnecke said.

Bromberek-Lambert has been Chief Reimagination Officer since 2015, leading significant growth of YWCA services to support families, including Head Start, Early Head Start and TechGYRLS. She was a key leader in the acquisitions of the YWCA Lake County, StreetWise and Voices for Illinois Children.

Founded in 1876, YWCA Metropolitan Chicago is a social enterprise committed to eliminating racism, empowering women and promoting peace, justice, freedom and dignity for all. As a leading association among a national network of more than 200 YWCAs, YWCA Metropolitan Chicago touches tens of thousands of women and families annually through comprehensive human services provided across the region. YWCA Metropolitan Chicago is a leader in the areas of sexual violence support, early childhood and child care provider services, family support, youth STEM programming and economic empowerment. A commitment to racial justice, equity and inclusion is foundational to all YWCA programs and services. Located in the third-largest American city, YWCA Metropolitan Chicago serves as a national incubator for innovative programming, outreach and engagement strategies. YWCA Metropolitan Chicago works at both the individual and systems levels to create the truly inclusive marketplace necessary for a diverse and balanced economy. The organization is an active member of many national, state, county and city-level coalitions, advocating for policies that combat racism and positively affect women and families. Learn more at http://www.ywcachicago.org and follow @ywcachicago on Twitter, Instagram, Facebook, LinkedIn and YouTube.