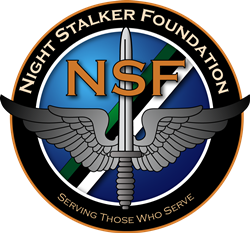 The Night Stalkers are the Soldiers of the elite 160th Special Operations Aviation Regiment (Airborne), made famous by their depiction in the movie, “Blackhawk Down” and other post 9-11 missions.

The Board includes former Night Stalkers who have entered the business world, as well as a broad cross-section of corporate executives, all of whom are devoted to caring for Night Stalkers and their Families.

LTC (Ret) Bill Golden, a Night Stalker Foundation Board member and the prime mover in the refocus, noted, “This is a major step toward expanding the support of the current and former Soldiers and Families of the 160th SOAR (A). Our vision is to be a best-in-class charitable foundation by developing an endowment to meet the current and future needs of the 160th’s Soldiers and Families, using best practice governance and processes, with a world-class team of board members and officers.”

More information on the Night Stalker Foundation can be found on the newly launched website at https://nightstalkerfoundation.com.