Nikko was a 35-Year-Old White-handed Gibbon Arrived from Oakland Zoo on November 27. Introductions to Jasmine and Jari were going well when suddenly he began showing signs of illness. Santa Barbara Zoo vets ran tests and were en route to a specialty clinic with him when he passed away. A necropsy revealed a mass in his GI tract, cancer is suspected but cannot be confirmed until lab results are in. 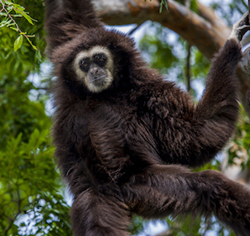 Nikko, while at Oakland Zoo

“We are all devastated Nikko is gone. He was very special to our Oakland Zoo family. He is, and will continue to be, greatly missed by our keepers, staff, and visitors alike,” said Dr. Parrott, President & CEO of the Oakland Zoo

Nikko, a 35-year-old white-handed gibbon who had arrived at the Santa Barbara Zoo from the Oakland Zoo less than one month ago, has died from a previously unknown medical condition. He first showed a decrease in appetite ten days ago, and passed away on Sunday, December 16 en route to veterinary internal medicine specialists for advanced testing.

Dr. Julie Barnes, the Zoo’s director of animal care and health, reports that surgery or treatment would not have been effective even if his condition had been diagnosed within the prior weeks. “This would have proved fatal, regardless,” she said. “We are so sad to have lost him so soon after his arrival, as he had already won everyone’s hearts.”

“We are all devastated Nikko is gone. He was very special to our Oakland Zoo family. He is, and will continue to be, greatly missed by our keepers, staff, and visitors alike,” said Dr. Parrott, President & CEO of the Oakland Zoo.

Nikko was to be a companion to the Santa Barbara Zoo’s elderly female gibbon Jasmine and her “adopted daughter” Jari, who is four. Both Jasmine and Nikko had lost their mates of several decades, and they were matched by the Association of Zoos and Aquariums (AZA), which collectively manages species in their accredited zoos. Gibbons are social creatures and it was believed that this new “blended family” would benefit all three apes.

Prior to leaving Oakland, Nikko received a thorough pre-transfer exam that included extensive blood tests, radiographs, an ultrasound and an EKG. No abnormalities were detected, and the transfer proceeded. He arrived in Santa Barbara on November 27 and was in quarantine in the gibbon holding area. He was eating and behaving normally initially, and had begun introductions to Jasmine and Jari.

On Monday, December 10, keepers observed a decrease in appetite, but Nikko otherwise continued to exhibit normal behaviors. Over the next few days, staff became increasingly concerned as he continued to eat less.

“Taking into consideration all the changes in his life, we didn’t want to rush into anesthesia, which would be necessary in to order to examine him,” said Dr. Barnes.

On Thursday afternoon, he was found very weak in his holding area, and transferred to the Animal Clinic where he received fluid therapy and diagnostic testing.

“His blood and urine tests showed acute liver and renal failure,” says Dr. Barnes. “The radiographs and ultrasounds were inconclusive and it was proving difficult to get a diagnosis. On Sunday, we arranged to have him seen by veterinary internal medicine specialists about 15 minutes away, where he could have a more advanced ultrasound examination.”

A necropsy was performed at the zoo where a mass in the upper abdomen was detected, along with abnormalities of both kidneys and the liver. Neoplasia (cancer) is suspected, though confirmation from testing will take from 2 to 4 weeks.

Nikko’s body will be returned to the Oakland Zoo, per their request, for burial.

The Santa Barbara Zoo is located on 30 acres of botanic gardens and is home to nearly 500 individual animals in open, naturalistic habitats. It is accredited by the Association of Zoos & Aquariums(AZA), representing the highest level of animal care, and participates in AZA endangered species programs for Asian elephant, California condor, Channel Island fox, and Western lowland gorilla, among others. A private 501(c)(3) nonprofit corporation, the Santa Barbara Zoo depends on community support, not tax dollars, for operations and improvements.
Visit http://www.sbzoo.org.

Oakland Zoo, home to more than 750 native and exotic animals, is managed by the Conservation Society of California (CSC), a non-profit organization leading an informed and inspired community to take action for wildlife locally and globally. With over 25 conservation partners and projects worldwide, the CSC is committed to conservation-based education and saving species and their habitats in the wild. Oakland Zoo is dedicated to the humane treatment of animals and is accredited by AZA, the national organization that sets the highest standards for animal welfare for zoos and aquariums.
Visit http://www.oaklandzoo.org.