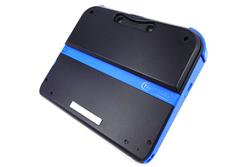 Customers just want to go longer between charges, and that’s where we come in. We don’t just sell a battery. We sell reliability and capacity, and customers are responding in record numbers.

Mugen Power Batteries (http://mugen.co), the leading manufacturer of high-capacity batteries for handheld devices, announced the release of its 2500mAh extended battery for Nintendo 2DS, which is proven to extend the usage between necessary recharging, increasing the lifetime of the device by 92%.

“One of the most rewarding parts of leading this company is that we’re on the cutting edge of technology. We work to improve the capacity of devices produced by the most innovative companies in the world. We’re excited to break into the handheld gaming sector and bring gamers across the globe a better playing experience,” says Nikolai Lebedovsky, CEO of Mugen Power Batteries.

The new battery is fully compatible with the Nintendo 2DS and fits well onto the device. It includes the battery door, as well. This new release comes after outside testing on the manufacturer’s components. Polygon, with its own research, sums up the findings well: the device lasts 3-9 hours depending on the games you play. This has allowed Mugen to look for improvements.

“Nintendo has definitely done something special. They’ve got a great following, they’re innovative, and I think it goes without saying that their products are iconic in ways most companies never achieve. We look forward to even more to come. But, at the end of the day, if it doesn’t power on, it doesn’t matter what’s under the hood,” jokes Lebedovsky.

“Customers just want to go longer between charges, and that’s where we come in. We don’t just sell a battery. We sell reliability and capacity, and customers are responding in record numbers."

Mugen Power 2500mAh Extended Battery for Nintendo 2DS is available for US$89.50, direct from Mugen Power Batteries at: http://mugen.co/mugen-power-2500mah-extended-battery-for-nintendo-2ds-with-battery-door.html.

Mugen Power batteries perform better via higher capacity and reliability, and the superior performance improves run time, often doubling that provided by the original installation. All batteries undergo vigorous QA procedures, resulting in the lowest return rate in the market. All Mugen Power batteries are CE and RoHS certified.

NOTE FOR EDITORS: Mugen Power 3000mAh Extended Battery for Nintendo 2DS is available, on request, to editors of tech magazines and bloggers who wish to write a review of the battery.