“IGBO Is the Humankind Race” from Christian Faith Publishing author NNE NTETE is an intriguing account that brings to the attention of the oppressors and encourages them to stop annihilating the Igbo people indirectly. 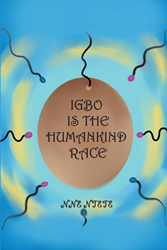 “IGBO Is the Humankind Race”: a contemporary documentation that seeks to help oppressors eradicate the idea of black and white races, as well as slavery. “IGBO Is the Humankind Race” is the creation of published author NNE NTETE, who has always been the annual member of the court of honor of the Bishop’s Annual Catholic Appeal in the diocese of Brooklyn and Queens, New York, for many years. She was also appointed as an honorary member of President Barack Obama’s “kitchen cabinet” in 2009.

NNE NTETE writes, “The purpose of the documentation is not to blame the colonial team who coined out ‘the N-word’ slave country named Nigeria or praise the victims from the southern protectorates who had been dehumanized since 1914. The purpose of the documentation is to bring to the attention of the oppressors and encourage them to stop annihilating Ndị Igbo/the Igbo people indirectly. The oppressors need to develop a sense of oneness with the oppressed, according to Chineke, Chukwu Okike Abịama’s plan when he created Adam. The Lord Almighty God did not create Nigeria. The British–educated female journalist and the colonial team coined out ‘the N-word’ slave country named Nigeria in February 1914. The indigenous people were not invited to participate in naming their country. The colonial team unilaterally had already carved out the African continent among themselves in Berlin at the conference that commenced in November 1884 and ended on the 26th of February 1885. The colonial team deliberately destroyed the empires and kingdoms that flourished in the giant African continent. This documentation shall help oppressors eradicate the idea of the black race/white race and slavery. This documentation shall help oppressors step aside and allow the indigenous people all over the African continent to revive/restore their empires and kingdoms. The oppressors should cease from supporting and supplying weapons to the nonindigenous herdsmen who exterminate the indigenous citizens of Nigeria.”

Published by Christian Faith Publishing, NNE NTETE’s new book is a stirring novel that opens the eyes of the readers for them to be able to see the ability of the Igbo people.

With this book, the author wants the readers to set aside racism and accept one another despite differences. This book is filled with facts about the Igbo people, who are special skilled builders of the Lord Almighty.

View a synopsis of “IGBO Is the Humankind Race” on YouTube.

Consumers can purchase “IGBO Is the Humankind Race” at traditional brick & mortar bookstores, or online at Amazon.com, Apple iTunes store, or Barnes and Noble.

For additional information or inquiries about “IGBO Is the Humankind Race,” pR contact the Christian Faith Publishing media department at 866-554-0919.