Established in 1924, National Coin Week emphasizes that money is history you can hold in your hands, according to the American Numismatic Association 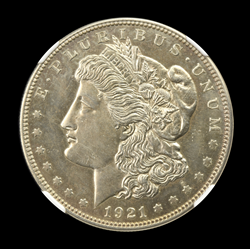 ..the designs, denominations and metallic content of coins can tell us a great deal about civilizations, past and present...

Every coin or piece of paper money in your pocket, wallet, or purse has a story to tell about history, and the stories will be celebrated by collectors nationwide during National Coin Week (http://www.NationalCoinWeek.org), April 18-24, 2021.

It is sponsored by the nonprofit American Numismatic Association (http://www.money.org) to focus attention on “the historical, cultural, artistic and economic importance of money as well as the enjoyment of coin and paper money collecting,” according to the National Coin Week coordinator Andy Dickes.

The theme of the 98th National Coin Week is “Money, Big & BOLD.” It was inspired by this year’s 100th anniversary of the last time the United States Mint produced two different designs of silver dollars for circulation in the same year, 1921.

Morgan dollars were minted between 1878 and 1921 and are named after their designer, engraver George T. Morgan. Peace dollars struck between 1921 and 1935 are a symbolic representation of hope for peace following the end of World War I. The United States Mint will be striking special 2021-dated versions of the historic Morgan and Peace design silver coins for collectors.

“Over the centuries, the designs, denominations and metallic content of coins can tell us a great deal about civilizations, past and present, such as famous and not-so-famous political and historical figures, important events, and landmarks,” explained Dickes. “There’s no coin shortage during National Coin Week.”

The American Numismatic Association is providing complimentary online educational programs as well as hobby-related games and quizzes for children at http://www.NationalCoinWeek.org. Between April 18 and 24, new members can join the association at special discount rates of $5 for an online-only membership and $20 to receive the print edition of the Association’s award-winning monthly magazine, The Numismatist.

National Coin Week, observed every third week of April, was established in 1924 to attract the general public to the enjoyable hobby of coin collecting. For additional information, visit http://www.NationalCoinWeek.org.