No Matter What Your Past May Have Been, There Is Hope For Your Future 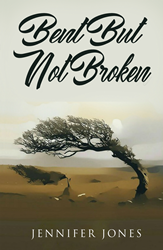 Trust me, no matter what you have been through, you can be healed

Jones endured her childhood under difficult circumstances and began her adult life going down the wrong path. Finally, as the single mother of three children, she decided she wanted them to have a better life than the one she had lived. With them as her inspiration, she began to pursue her healing.

“As I share my story with you, it is my sincere hope/intention to encourage anyone who is going through troubled times. Trust me, no matter what you have been through, you can be healed,” said Jones.

Jennifer Jones began her career as a correctional officer before spending ten years as an independent security contractor in places such as Iraq, Bahrain, Kuwait, and Afghanistan. After returning to the States, she continued to pursue her love of travel as a commercial truck driver. Jones is the mother to three beautiful children and makes her home in Arlington, Texas.

Xulon Press, a division of Salem Media Group, is the world’s largest Christian self-publisher, with more than 15,000 titles published to date. Bent But Not Broken is available online through xulonpress.com/bookstore, amazon.com, and barnesandnoble.com.