No One Knows For Sure, But The War Of Gog And Magog Could Look Something Like This 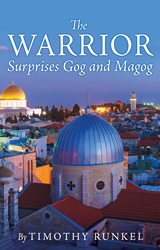 This novel fulfills details in fresh and plausible ways.

Air Force Captain Michael Martin encounters inexplicable phenomena while doing reconnaissance. It takes the insight of his brother, Rabbi Daniel, and another learned friend to see the parallels between current events and biblical prophecy. Meanwhile, Martin’s sister Sarah works on reporting the events when she still doesn’t understand the meaning behind it all.

“Many believe Ezekiel’s prophesied war of Gog and Magog is imminent, will be earth shaking, and will lead to a spiritual awakening. This novel fulfills details in fresh and plausible ways,” said Runkel.

Dr. Timothy Runkel has earned three masters’ degrees and a doctorate in interdisciplinary fields. He has lived overseas and worked as a counselor, a software engineer, and a data scientist. He and his wife in live Florida.

Xulon Press, a division of Salem Media Group, is the world’s largest Christian self-publisher, with more than 15,000 titles published to date. The Warrior Surprises Gog and Magog is available online through xulonpress.com/bookstore, amazon.com, and barnesandnoble.com.