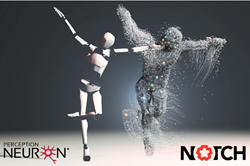 When our system is integrated with powerful softwares such as Notch VFX, one can really add a whole new dimension to a live show such as a DJ set, dance performance, or concert.

Coming off a successful showing at Austin’s SXSW Conference and Festivals, Noitom, creators of the Perception Neuron motion capture system, will be at Pro Light & Sound in Frankfurt, Germany to showcase more of its solutions and software partners at the annual entertainment technology show taking place April 2-5.

Noitom’s mission, since their launch in 2014, has been to democratize motion capture by making the technology both available and affordable.
Animators, game developers, independent filmmakers, artists, performers, and researchers, are now able to easily utilize motion capture technology into their projects without the need for expensive camera setups or dedicated capture space. With its fully wireless capability, Perception Neuron makes is possible for visual effects, live animation, and kinematic studies to be performed right from a desk or even outdoors.

During Pro Light & Sound, Noitom will be demonstrating how their full-body motion capture suit can help to create stunning visual effects for live shows including concerts and stage performances. Partnering with software company Notch VFX, attendees of the show will see first hand how the Perception Neuron system, when worn, can generate live, 3D graphics that flow with the movements of the wearer. This combination gives producers and stage directors the ability to add real-time, rendered graphics that can be projected onto the stage and on screens throughout the venue with just the use of a computer and Perception Neuron’s motion capture system with Notch VFX’s software.

“At the core, we’re a motion capture company. Motion capture used to be limited to animation and big budget films but after introducing our affordable motion capture system five years ago, creators from all industries have begun to see how useful this technology can be for their work, “ says Roch Nakajima, president of Noitom International. “When our system is integrated with powerful softwares such as Notch VFX, one can really add a whole new dimension to a live show such as a DJ set, dance performance, or concert. A set of tools such as this can really raise the bar for what can be visually done live, and we’ve made it extremely easy for anyone to use.”

Pro Light & Sound takes place April 2-5 at Messe Frankfurt in Frankfurt, Germany. Noitom will be performing live demos throughout the show from Booth B-40. For tickets and information, visit the Pro Light & Sound website, https://pls.messefrankfurt.com/frankfurt/en.html.

For more about Noitom and its motion capture products, visit Noitom.com.