From Hollywood to Aollywood, Dialogue Across the Pacific 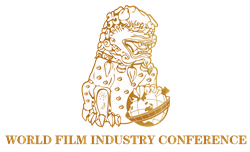 This annual meeting and the upcoming 18-nation summit that will be held every two years are both expected to become a platform for dialogue between major powers.

Taking on the theme, From Hollywood to Aollywood, Dialogue Across the Pacific, to Build a Community of Global Film Destiny, the WFIC’s purpose is to find a path for global films in the post-pandemic era. The Conference will be comprised of several events over the three-day period and will include a focus on global opportunities and challenges faced by the world film industry, rebuilding cooperation order and criteria, as well as fighting for more jobs in the film and television industry.

World Film Industry Conference President, Ting Zhu, said, “This annual meeting and the upcoming 18-nation summit that will be held every two years are both expected to become a platform for dialogue between major powers.”

Simultaneously, the Macau venue, will feature seminars on, “Chinese Culture Power Forum,” as well as the “Global Forum of City Mayors,” and the “Aollywood Five Continents Film Festival.” Among them, the 18-nation “Leaders’ Summit,” also known as the "Cultural Issues Summit,” aims to coordinate the cultural policies of various countries, revitalize the cultural and creative industries, as well as conduct consultations on major issues of common concern in the cultural field. Global cultural and film industry leaders will discuss developments and trends of the global film industry and the 600 media from around the world.

Aollywood Film Workers Association was established in Macau, China in 2020 and, along with the Huading Awards Committee, are sponsors of the first-ever World Film Industry Conference. Members of Aollywood Film Workers Association include thousands of professionals in the film field in Asia. The purpose is to establish a foothold in Macau and take advantage of the Guangdong-Hong Kong-Macau Greater Bay Area to build a new destination for world-wide filmmakers.