ATS’s John Kearney calls for sensible hiring practices, effective accelerated training, and national “ban the box” laws to make the most of an opportunity both for the trucking industry and for society. 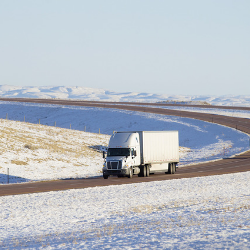 John Kearney, CEO of Advanced Training Systems, discusses how reformed felons are an untapped resource of employment within the trucking industry.

“Formerly incarcerated people, who currently have a 27% unemployment rate, are a largely untapped resource that could help the U.S. trucking industry fill its urgent need for new drivers.”

According to the American Trucking Association, this country’s long-haul trucking industry needs about 51,000 more drivers than it currently has to meet demand for shipping capacity from companies like Amazon and Wal-Mart.[1] Meanwhile, the U.S. unemployment rate dropped to 4.0% in January, its lowest point in a decade and less than half of its recession-era level of October 2008.[2] “At the same time,” says John Kearney, CEO, Advanced Training Systems LLC, “there is a segment of the population looking eagerly for employment.” Kearney, whose company is a leading designer and manufacturer of virtual simulators for driver training, among other applications, adds, “Formerly incarcerated people, who currently have a 27% unemployment rate[3], are a largely untapped resource that could help the U.S. trucking industry fill its urgent need for new drivers.”

A frequently raised objection to hiring ex-offenders is the recidivism issue. More than half a million people are released from federal and state jails and prisons in the United States each year, and of those, according to the U.S. Bureau of Justice, about two-thirds will be rearrested within three years.[4] A joint study by America Works and the Manhattan Institute, however, notes Kearney, showed that recidivism rates dropped significantly for nonviolent offenders who became employed shortly after leaving prison. In prison-to-work programs in six cities across the country, in fact, in states with overall recidivism rates ranging from about 31% to 70%, the rates for those placed in jobs shortly after their release ranged from 3.3% to 8%.[5]

While a criminal record was once considered a knockout factor in evaluating a prospective employee in many jurisdictions, there is now a wide range of state and local regulations regarding the use of criminal records in offering or refusing employment. The practice of removing the criminal record question from employment applications is commonly called “Ban the Box.” In some places, Ban the Box regulations are applicable where the employee lives, and in others where they work is performed. Never, says industry consultant Lana Batts, do they apply to where the employer is domiciled. “The very nature of trucking,” says Batts, “makes compliance with a diverse grab-bag of Ban the Box rules a significant challenge; the trucking in industry, which keenly understands the costs of the driver shortage, needs a national Ban the Box solution applicable wherever a driver might find himself or herself in the course of completing a shipment.”[6]

Another important factor in integrating ex-offenders into the driving workforce, notes Kearney, is a reasonably streamlined training process. One important component of streamlining is the use of computerized simulation to familiarize new drivers with the proper way to handle situations too dangerous to attempt in conventional behind-the-wheel training.

“As with the shortage of school bus drivers,” says ATS’s Kearney, “also a growing source of concern[7], advanced training simulators offer an economical and highly effective approach to increasing the available supply of long-haul truckers. The technology can both reduce the cost of training and produce better, safer drivers.”

About Advanced Training Systems LLC:
Advanced Training Systems (ATS) is a high-tech simulator technology and engineering firm that has revolutionized the design and manufacture of advanced training systems to improve training and create safer drivers. ATS, the holder of multiple patents in high-tech training simulation, has as its mission to provide this cutting-edge adaptive training to all involved in the transportation industry at an affordable cost, resulting in safer drivers/operators. For more information, visit http://www.atstrainingsystems.com