Sure, TikTok and Twitter may or may not merge, and Facebook's new Instagram Reels sure is a cute enough attempt to compete to provide you with endless pages of copy this week — but what do you say we give Big Tech the media boycott they deserve and get a *real* industry scoop from Hacker Noon's Second Annual Tech Awards? 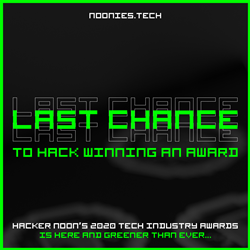 Nominations for the 2nd Annual Hacker Noon Tech Awards, the Noonies, Close on August 12, and Voting Opens on August 13

There are over 200 Hacker Noon Tech Industry Awards and prizes up for grabs this year — not to mention a prize pool of over $10,000 and 3,000+ Years of Domain Registration

In case you've not yet had the pleasure: The 2020 Noonies — presented by hackernoon.com — are not only the only Industry Awards you don't have to be an influencer to win, but also the most community-driven awards on the internet.

There are over 200 Tech Industry Awards and prizes up for grabs this year — not to mention a prize pool valued at over $10,000 — including:

Thank you to TECH Domains for this awards prize, which includes $ 3000 Cash Prize + a Free 10-yr domain for the winner!


Shoutout to Skillsoft for this award's prizes, and the prize for Hacker Noon Contributor of the Year - WOMEN IN TECH, which both include 1 Year FREE Access to Percipio to the Winner.


"Improving on our stack from last year, we’ve built this year’s Noonies on — the now much loved by the whole Hacker Noon dev team — Next.js, and refactored a lot of it to take advantage of the ever-shifting ‘current’ standards of evolving technologies," explains Hacker Noon's lead full-stack developer on the project, Storm Farrell. "The result is a more robust, future-proof and feature-rich 2.0 submission and voting platform."

"It's incredible to see the broader tech community come together — in these unprecedented times — to sponsor big award prizes for top technologists, makers, and creators in tech today," said David Smooke, CEO and Founder of Hacker Noon. "We're excited about the opportunity to recognize and reward the people in our global community who are working to make the internet a better place."


"The *'why'* behind this year's better, bigger, and longer Noonies campaign is to give the community the chance to make sure ***everybody*** who deserves the recognition of being nominated for a Hacker Noon tech industry award this year gets the chance to be included," says Natasha Nel, Hacker Noon's Managing Editor. "I'm looking forward to getting to know all of our 2000+ nominees via hackernoon.com blog interviews, Hacker Noon Podcasts, and our upcoming AMA series."


For more information, or **to request an interview with any of Hacker Noon's 2020 Noonie Nominees**, reach out to Natasha on Twitter @natashanoon.

How hackers start their afternoons. Hacker Noon is built for technologists to read, write, and publish. We are an open and international community of 12,000+ contributing writers publishing stories and expertise for 4,000,000+ curious and insightful monthly readers. Founded in 2016, Hacker Noon is an independent technology publishing platform run by David Smooke and Linh Dao Smooke. Get your technology story published today.

The Noonies are an annual tech industry awards event, presented online by Hacker Noon, built to recognize and reward the most innovative people and products in technology today. Conceptualized in early 2019, Hacker Noon’s first annual Noonies celebrated the contributions of over 500 internally and publicly nominated technologists, thinkers, makers, and leaders in tech. The second edition will run for an extended period of three months, with [public nominations open for a full month from July 13 to August 12, with voting open for two months, from August 13 to October 13.