Two of Nor-Tech’s HPC cluster client research projects, the LIGO Gravitational Wave Observation and The IceCube Neutrino Study, were each awarded a Nobel Prize for Physics; LIGO in 2017 (announced last week) and IceCube in 2015. 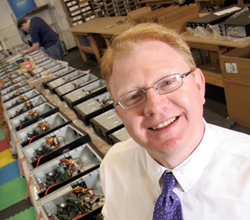 We are absolutely thrilled that we were able to participate in two Nobel Prize-winning projects in the space of three years.

Two of Nor-Tech’s HPC cluster client research projects, the LIGO Gravitational Wave Observation and The IceCube Neutrino Study, were each awarded a Nobel Prize for Physics; LIGO in 2017 (announced last week) and IceCube in 2015.

Nor-Tech President and CEO David Bollig said, “We are absolutely thrilled that we were able to participate in two Nobel Prize-winning projects in the space of three years. In the case of LIGO, they were looking for powerful, but easy-to-deploy clusters, which is a niche that we really own now. And in the case of IceCube, which involved the usual budgetary constraints of educational institutions, they needed to find a way to continually add to their compute power and stay within budget. We were able to come up with a highly innovative way to do that for them.”

Bollig continued, “We have risen to the top of the HPC cluster industry fairly quickly. I attribute that to knowing the needs of the market—thanks to our account reps—and being able to meet and exceed those needs better than anyone else around—thanks to our engineers. We have a fantastic synergy here that continues to benefit all of our clients.”

In awarding this year’s prize to The LIGO Gravitational Wave project, the Royal Swedish Academy called the project’s detection of the first gravitational wave, “a discovery that shook the world.” These waves were predicted by Albert Einstein more than 100 years ago but never directly seen until late 2015. The official announcement by the National Science Foundation (NSF) was Feb. 11, 2016.

The IceCube Neutrino Observation project centers around a neutrino detector buried under 0.9 miles of ice at the South Pole. The ice provides a shelter from other types of radiation and particles that would otherwise interfere with the extremely rare instances when neutrinos interact with the detector. The project and ultimate observation of neutrinos was called "a fundamental step in unveiling the nature of the neutrino," by the Nobel Prize committee.

Nor-Tech is on CRN’s list of the top 40 Data Center Infrastructure Providers—joining ranks with IBM, Dell, Hewlett Packard Enterprise, and Lenovo. The company is renowned throughout the scientific, academic, and business communities for easy to deploy turnkey clusters and expert, no wait time support. All of Nor-Tech’s technology is made by Nor-Tech in Minnesota and supported by Nor-Tech around the world. In addition to HPC clusters, Nor-Tech’s custom technology includes workstations, desktops, and servers for a range of applications including CAE, CFD, and FEA. Nor-Tech engineers average 20+ years of experience and are responsible for significant high performance computing innovations. The company has been in business since 1998 and is headquartered in Burnsville, Minn. just outside of Minneapolis. To contact Nor-Tech call 952-808-1000/toll free: 877-808-1010 or visit http://www.nor-tech.com. Full release at: http://www.nor-tech.com/category/news/. Media Contact: Jeanna Van Rensselar, Smart PR Communications; jeanna(at)smartprcommunications(dot)com.