Historic Maryland Theatre Board of Directors Praised for Vision 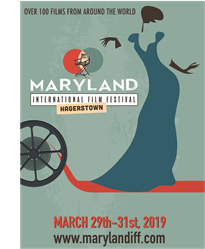 "It was the Maryland Theatre board of directors who stuck to advocating a true vision to make Hagerstown a better place for the arts. This is truly recognizing a community standing together," said Hovey.

(Hagerstown, MD) -- The Maryland International Film Festival-Hagerstown has announced that the Historic Maryland Theatre Board of Directors has been chosen as the 2019 Nora Roberts Foundation Award recipient. The prestigious award is given in recognition of either success in the film and television industry, or in creating opportunities for achievements for the film and arts communities in Maryland. The award especially recognizes Maryland ties. The Executive Director of the Film Festival Tracie Hovey said, "The Maryland International Film Festival-Hagerstown recognizes the 'visioning' that the Maryland Theatre Board of directors has had, over many years, to plan and push what is now an incredible Urban Improvement Project forward for Hagerstown and Washington County," Hovey said that this year's award recognizes the commitment of the board of directors, and also the collaboration with a community-wide coalition of supporters. The multi-million dollar renovation and expansion project of the Maryland Theatre joins with tremendous expansion efforts taking place with the Barbara Ingram School for the Arts, the University System of Maryland at Hagerstown, and more.

"It was the Maryland Theatre board of directors who stuck to advocating a true vision to make Hagerstown a better place for the arts. The board advocated, planned, fundraised, financed, collaborated, and a lot more. The entire community is participating, along with private companies, individuals, donors and supporters, elected officials, and other boards of directors of several groups. This is truly recognizing a community standing together," said Hovey.

About the Maryland Theatre and its Board of Directors:

The Maryland Theatre was built in 1915. The historic theater was designed by Harry E. Yessler of Hagerstown and the renowned Thomas W. Lamb of New York. Mr. Lamb is recognized for his work on The Hippodrome Theatres as well as Madison Square Garden Theatre, along with famous theatres in England, Egypt, India, and South Africa. The Maryland Theatre opened on May 10, 1915. The very first sell-out audience was treated to music by a live orchestra in the pit as well as a five-reel feature film. The Maryland Theatre was known as a Vaudeville House, and then in 1927, the Theatre received new seating and became a movie theatre primarily.
The front building part of the Maryland Theatre was destroyed by fire in 1974. The once grand Maryland Theatre fell into disrepair until 1976, when a local funeral director, Gerald N. Minnich purchased The Maryland Theatre just 45 days before it was due to be sold and torn down, only for its 1,000,000 bricks. The Theatre's auditorium re-opened in 1978, led by the extraordinary efforts and enthusiasm of local businessman, Jack Garrott. Mr. Garrott and a dedicated group of community members who named themselves Citizens to Save The Maryland Theatre gathered donated supplies, services, and monetary gifts to make the re-opening possible. The historic, beautifully restored neoclassical Maryland Theatre had its grand re-opening and has been delighting audiences since.
Today, the Maryland Theatre is the anchor of the State of Maryland's first Arts & Entertainment District. The district includes the award-winning high school for the visual and performing arts (The Barbara Ingram School for the Arts), offices of the Washington County Arts Council and numerous new businesses and retail enterprises. The Theatre provides seating for nearly 1,300 at an average of 175 events and performances annually. Activities at the theatre consist of country artists, comedians, orchestra concerts, children's shows, musicians, recitals, stage shows, including serving as the home of the Maryland International Film Festival-Hagerstown, Maryland Symphony Orchestra, Barbara Ingram School for the Arts, City Ballet School, Authentic Community Theatre, The Miss Maryland Scholarship Pageant and Hagerstown Community Concert Association as well as many others. The Maryland Theatre welcomes approximately 100,000 people through its doors annually including over 5,000 volunteers and 12,000 local students.
The Maryland Theatre is an independent non-profit, managed by a hard-working volunteer Board of Directors. The theater itself is supported by ticket sales, sponsorships, and grants. The board mission is to preserve, restore, and maintain The Maryland Theatre as a historic property and to provide quality entertainment, educational, and cultural offerings to the community at large. The board of directors voted to move forward with a vision for the performance-art gem and is managing a $15-million expansion project, adding more than 30,000 square feet of space. The new facilities will include five new floors transforming The Maryland Theatre, the crown jewel of Hagerstown's A&E District into a Performing Arts Complex. The significant expansion project will consist of a multi-functional top floor capable of hosting private seated events such as weddings or business dinners for nearly 300 people, vendor, and trade shows, or performance space with audience seating for 300. A rehearsal space which replicates the auditorium stage complete with changing facilities will make up the majority of the 3rd floor to support educational and local performing arts partners. This space will provide practice space during the 175 days annually when the stage is already occupied, as well as serving as daily classroom space with connectivity to the Barbara Ingram School for the Arts. Five multi-use spaces will be available in the expansion, including gallery and display areas. The expansion project will include a box office, large conference room, volunteer space, locker and changing rooms for dance and school students, bridal suite/star dressing room, VIP viewing area, concessions, and merchandise sales areas.

Past Nora Roberts Foundation Award Winners include:
2018 - Shelly Strong from Smithsburg. Strong is the previous VP of Production at DreamWorks Studios (now Amblin Partners) and is now the Head of Physical Production. Her credits include: "Tropic Thunder," "The Help," "I Love You, Man," "Girl on a Train," and the upcoming "The House with a Clock in its Walls." Strong is currently the only woman among heads of physical production at the major studios and is active in mentoring female filmmakers. She holds a position on the steering committee of the Women's Production Society; which is a group of female executives in physical production with the mission to promote the hiring of women in leadership roles in film and television production. Strong is also an advocate for the homeless.
2017 - Eduardo Sanchez, Director, and Maryland resident. In 1997 he started production on the most successful movie (budget to gross) ever, The Blair Witch Project (1999). It was a worldwide hit and has become one of the most spoofed films of all time. Sanchez directs films and television shows throughout the world.
2016 - Scott Gardenhour, feature film producer, and the co-founder and executive producer of the Emmy award-winning commercial production house, The Institute. Washington County-native. Gardenhour's credits include "Pearl Harbor" and "13 Hours."
The Eighth Annual Maryland International Film Festival-Hagerstown received more than 400 submissions from around the world, and the judges announced that over 150 films were selected, making it the largest film festival in Maryland. Opening night Friday, March 29, 2019, is taking place at the Historic Maryland Theatre in Downtown Hagerstown. Other venues on Saturday and Sunday, March 30 and 31 include the Washington County Free Library, The Grand Piano Ballroom, the University System of Maryland Hagerstown, and the Washington County Chamber of Commerce. Films from 16 nations are in this year's festival.
For more information about the festival, and to purchase tickets see: http://www.marylandiff.com. The non-profit Maryland International Film Festival-Hagerstown partners with several local organizations, businesses, and individuals. The major sponsors include: the City of Hagerstown, Hagerstown-Washington County Convention and Visitors Bureau, Washington County Government (Office of Grant Management), Washington County Arts Council, Ovation PR and Advertising, Nora Roberts Foundation, Delaplaine Foundation, Potomac Case Management, Gideon Properties LLC, International Corporate Training and Marketing, Homewood Suites by Hilton-Hagerstown, Bowman Group, University System of Maryland Hagerstown, Washington County Chamber of Commerce, Bullitt Point Productions, Bulls and Bears, 28 South, WDVM, Northwest Mutual, the Maryland Film Office, and Tom Riford.