Norina D’Aloiso Owens’s newly released “Dancing with the Devil: Life and Death in the Occult” chronicles one’s divine encounters with the powerful grace of God

“Dancing with the Devil: Life and Death in the Occult” from Christian Faith Publishing author Norina D’Aloiso Owens unravels a profound journey throughout life as one faces the battles and adversities with the guidance of faith and strength of the heart. 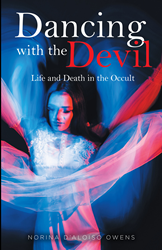 D'Aloiso Owens shares, “Norina D’Aloiso Owens is the founder of Women of Faith International, Inc., with branches in California, Pennsylvania, and Kenya, East Africa. She is the daughter of an Italian immigrant father and an Italian American mother, both of whose ties stem back to the province of Isernia in Italy’s Molise region. Her father, Domenico D’Aloiso, broke tradition and became an evangelist and pastor of a nondenominational Pentecostal church in her hometown of Ellwood City, Pennsylvania. After an unhappy childhood and two disastrous marriages, Norina turned from God. Although a Christian who loved Jesus, she flirted with the occult, but to her physical and mental detriment. Her path back to Him was fraught with numerous serious medical challenges. Now entering her nineties, she remains very active, crisscrossing the country regularly and sharing her faith. Norina was ordained in 1985 by the Independent Assemblies of God in Laguna Hills, California, and is a graduate of the International School of Ministry. She holds an honorary doctorate degree from Endtime Ministries International Bible University in California.”

Published by Christian Faith Publishing, Norina D’Aloiso Owens’s new book is a gentle reminder for everyone to trust God and His power against life’s adversities. May this book inspire the reader to let God direct their steps as much as the author did.

View a synopsis of “Dancing with the Devil: Life and Death in the Occult” on YouTube.

Consumers can purchase “Dancing with the Devil: Life and Death in the Occult” at traditional brick & mortar bookstores, or online at Amazon.com, Apple iTunes store, or Barnes and Noble.

For additional information or inquiries about “Dancing with the Devil: Life and Death in the Occult,” contact the Christian Faith Publishing media department at 866-554-0919.