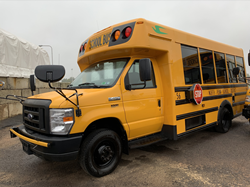 Propane autogas operates clean and is much cheaper than diesel or compressed natural gas, plus it costs less to maintain a propane school bus. So, it was an easy decision.

“Propane school buses make the most sense for us. Other types of alternative-fuel school buses are cost prohibitive and do not make sense for a school district our size,” said Angelo Tornetta, technician supervisor for North Penn School District. “Propane autogas operates clean and is much cheaper than diesel or compressed natural gas, plus it costs less to maintain a propane school bus. So, it was an easy decision.”

Propane-powered buses emit far fewer NOx than diesel buses, and university studies have shown that this improvement increases in the start and stop duty cycle of a school bus. Exposure to NOx exhaust can have negative health effects on children, according to the Environmental Protection Agency. Propane buses do not require dozens of extra parts in order to reduce emissions, which lowers maintenance costs.

The district’s drivers are impressed with the power of the new propane buses and the low amount of noise that the engines create. Buses fueled by propane reduce noise levels by about half compared to a diesel engine. Drivers note that the propane buses make for a much quieter and calmer bus ride for the students.

“With a propane bus, I am able to monitor activity inside the bus much better than I'd ever been able to before,” said bus driver William Gottshall. “If something is going on inside the propane bus, I know about it immediately,”

Bus driver Kerri Neumeye agreed, also commenting on the bus’s performance. “The propane bus has excellent acceleration. When pulling into four lanes of busy traffic, you want the extra power this bus has.”

The district plans to purchase more propane buses with the budget it saves in fuel and maintenance.

About Blue Bird Corporation: Blue Bird is the leading independent designer and manufacturer of school buses, with more than 550,000 buses sold since its formation in 1927 and approximately 180,000 buses in operation today. Blue Bird’s longevity and reputation in the school bus industry have made it an iconic American brand. Blue Bird distinguishes itself from its principal competitors by its singular focus on the design, engineering, manufacture and sale of school buses and related parts. As the only manufacturer of chassis and body production specifically designed for school bus applications, Blue Bird is recognized as an industry leader for school bus innovation, safety, product quality / reliability / durability, operating costs and drivability. In addition, Blue Bird is the market leader in alternative fuel applications with its propane-powered, electric and compressed natural gas-powered school buses. Blue Bird manufactures school buses at two facilities in Fort Valley, Georgia. Its Micro Bird joint venture operates a manufacturing facility in Drummondville, Quebec, Canada. Service and after-market parts are distributed from Blue Bird’s parts distribution center located in Delaware, Ohio. For more information on Blue Bird’s complete line of buses, visit http://www.blue-bird.com.

Blue Bird is the leading independent designer and manufacturer of school buses, with more than 550,000 buses sold since its formation in 1927 and approximately 180,000 buses in operation today.

ROUSH CleanTech, an industry leader of alternative fuel vehicle technology, is a division of Roush Enterprises based in Livonia, Michigan.