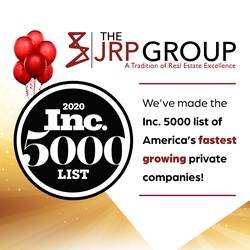 Success means having the courage, the determination, and the will to become the person you believe you were meant to be.

For the Second Time, The JRP Group Appears on the Inc. 5000,
Ranking No.1087 With Three-Year Revenue Growth of 431 Percent

Modesto, CA August 12, 2020 – Inc. magazine today revealed that The JRP Group is No. 1087 on its annual Inc. 5000 list, the most prestigious ranking of the nation’s fastest-growing private companies. The list represents a unique look at the most successful companies within the American economy’s most dynamic segment—its independent small businesses.

“Success means having the courage, the determination, and the will to become the person you believe you were meant to be.”

Not only have the companies on the 2020 Inc. 5000 been very competitive within their markets, but the list as a whole shows staggering growth compared with prior lists as well. The 2020 Inc. 5000 achieved an incredible three-year average growth of over 500 percent, and a median rate of 165 percent. The Inc. 5000’s aggregate revenue was $209 billion in 2019, accounting for over 1 million jobs over the past three years.

The JRP Group is proud to announce that we have been nationally recognized by Inc. 5000-2020 Fastest-Growing Private Companies in America. Every year, Inc. generates a list of the top 5000 most successful private companies in the country based on their success over the course of a year. The JRP Group was selected as a top 50 National Leader for the Fastest-Growing Private Company in the Real Estate sector. This is the 3rd time The JRP Group from Modesto, CA has been touted for their hard work and success. Earlier this year, The JRP Group was also recognized by Inc 5000 for the CA Edition. In 2019- Broker Singh was named to the prestigious 30 under 30 class that is presented yearly by Realtor Magazine. We want to thank all of our agents, associates, and employees for contributing to our success. We look forward to many more successful years.