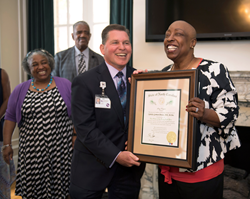 As a physician, minister, volunteer, advocate, community leader — Dr. Garmon-Brown embodies the spirit of giving and caring for others.

Dr. Ophelia Garmon-Brown, chief community wellness & health equity executive for Novant Health, has been awarded the Order of the Long Leaf Pine, the highest honor the state of North Carolina can give a civilian.

Created in the 1960s, the Order of the Long Leaf Pine is unique to North Carolina, and its recipients are chosen based on their contributions to their communities, extraordinary careers and many years of service. Notable recipients include the Rev. Billy Graham, Charles Kuralt, Maya Angelou, Michael Jordan and Andy Griffith.

Signed by Gov. Roy Cooper, Garmon-Brown’s certificate was presented in a surprise ceremony Monday, July 16 in the presence of colleagues, friends and family.

“Ophelia is a remarkable woman with extraordinary gifts and talents,” said Carl Armato, president and CEO of Novant Health. “As a physician, minister, volunteer, advocate, community leader — she embodies the spirit of giving and caring for others.”

Born in Detroit, Michigan, Garmon-Brown received a bachelor’s degree in biology from North Carolina Central University and earned a medical degree from the University of North Carolina at Chapel Hill. She then completed her residency in family medicine at Carolinas Medical Center in Charlotte, where she was the first female African-American graduate of the residency program.

As a board-certified family physician, Garmon-Brown has had a profound impact on the lives of the thousands she has cared for in the Charlotte community, her home since 1980. Her career path led her to high level leadership roles at the former Nalle Clinic, a multispecialty clinic, and Novant Health, where she has worked for nearly 20 years.

Beyond helping those across the Charlotte region, Garmon-Brown has traveled the globe as a medical missionary, delivering free care to those in need. Her mission work has taken her to Uganda, South Africa, Guyana, Jamaica and Kenya, where she established a mini-health clinic.

In 2003, Garmon-Brown returned to school to obtain a Master’s of Divinity degree and graduated from the Union Theological Seminary and Presbyterian School of Christian Education. Currently she is an active member of St. Luke Missionary Baptist Church.

She was co-founder of the Charlotte Community Health Clinic, the first free clinic in Mecklenburg County to be awarded the designation of becoming a Federally Qualified Health Clinic. She is also former medical director of the health clinic at the Salvation Army’s Women’s and Children’s Shelter; has volunteered at the Charlotte Pregnancy Care Center; served as the first African-American elected president of the Mecklenburg County Medical Society; a member of the Charlotte-Mecklenburg Schools Investment Committee, which announced the ambitious Project L.I.F.T. campaign; co-chaired the Charlotte-Mecklenburg Opportunity Task Force, where she helped convene the study of issues related to economic mobility for citizens in Charlotte and co-chaired the One Charlotte Health Alliance, a partnership which is the first of its kind to address disparities to build a stronger city.

Garmon-Brown has received numerous awards over the years for her dedication and commitment to the community, including the 2007 Charlotte Neighborhood Excellence Initiative Award, the Black Women’s Caucus Trailblazer Award, the 2010 Charlotte Woman of the Year award, the 2011 Thurgood Marshall Award of the Year, the 2011 Lifetime Achievement Award from Wells Fargo and Charlotte Business Journal, and the Mecklenburg County Medical Society President’s Award, among many others.

“Ophelia’s contributions to the community of Charlotte and the people of North Carolina has been nothing short of amazing,” Armato said. “Some say nobody cares how much you know until they know you care, and we surely know how much Ophelia cares.”