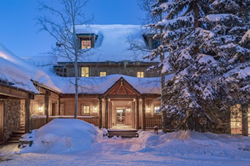 “Beyoncé & Jay-Z List Historic New Orleans Home”
Beyoncé & Jay-Z have listed their 13,000-square-foot New Orleans home for $4.45 million. One of the city's most historic buildings, it was once a church and an event center. Beyoncé also made news as the face of a new Tiffany commercial, a tribute to the Audrey Hepburn movie "Breakfast at Tiffany’s," which was filmed at a new Bel Air contemporary home on the market at $42 million.

“Frank Zappa to Lady Gaga to Jagger”
Lady Gaga owns several L.A. homes but has sold one of them, a 1939 Tudor-style home to Mick Jagger's oldest daughter, Lizzy Jagger, for $6.5 million. The seven-bedroom home in the Hollywood Hills was previously owned by musician Frank Zappa from the 1970s until his death in 1993. Frank's widow, Gail, continued to live in the home until she died in 2015. The home was then sold to Gaga for approximately $5.3 million.

“Meg Ryan Gets Healthy On Montecito Home”
Less than two years after she bought a 4,200-square-foot, modern farmhouse-style home in Montecito for $5.025 million, Meg Ryan has sold it for $13.3 million. An experienced home flipper, Meg put her profits into another Montecito home - much larger at 6,200 square feet - that she bought for $9.5 million.

“Hillary Swank Lists Her 1920's Home”
Hillary Swank has listed her longtime home in L.A.'s Pacific Palisades neighborhood for $10.5 million. Hillary bought the 1920's-era home in 2007 for $5.8 million and then spent much more on upgrades, including a home theater with a concession stand and lounge.

“Julia Child's Georgetown Home Is Delicious”
A 19th-century home in Washington's Georgetown neighborhood, where Julia Child lived for many years, is for sale at $3.5 million. According to the listing, Child and her husband lived in the traditional-style home from 1948 to 1961.

“Ariana Grande Sells L.A. Home”
Ariana Grande bought a contemporary home with 16-foot ceilings and just over 10,000 square feet in the Hollywood Hills last year for $13.7 million. With big L.A. views and four bedrooms, Ariana has already decided to move on. She recently sold the home for $14 million.

“Pink's Barry Manilow House Is Back”
A Malibu Beach home that was once owned by Barry Manilow now belongs to Pink, but maybe not for long. Pink bought the 4,320-square-foot home with five bedrooms a few months ago for $13.7 million, and has already listed it for $14.995 million. Recently remodeled and updated, the home has a courtyard, front and back porches, and 180-degree ocean views.