The commitment will take the world’s first all-diabetes pro cycling team through its eighth season, making it the longest-running continued title sponsorship for any current US-registered UCI professional team, including all World Tour, Professional Continental, and Continental squads. 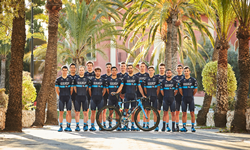 “Sponsorship is challenging for any team and we are honored to now have the longest-running title sponsor of any current American-registered professional team," said Phil Southerland, CEO and Co-Founder of Team Novo Nordisk.

“Sponsorship is challenging for any team and we are honored to now have the longest-running title sponsor of any current American-registered professional team,” said Phil Southerland, CEO and Co-Founder of Team Novo Nordisk. “We believe this is a testament to our mission, the multi-faceted approach we’ve taken through successes at races, global media exposure across endemic and non-endemic outlets, an unmatched social media presence and extensive community activities.

Team Novo Nordisk’s partnership with the Danish pharmaceutical company began in December 2012 based on the shared goals to inspire, educate and empower people around the world affected by diabetes. Before Team Novo Nordisk, the squad raced as Team Type 1 for five seasons with a mix of riders with and without type 1 diabetes.

“We are thankful to Novo Nordisk for this ongoing opportunity and look forward to the future. Over the past seven years, we have grown together with a long-term vision of identifying and developing athletes with type 1 diabetes. This partnership has allowed us not only to help them grow into amazing bike racers but also to be heroes for every person with diabetes around the world,” said Southerland. “In the first half of 2019, we have showcased our Changing Diabetes jersey aggressively at World Tour races by wearing the Intermediate Spring jersey for four consecutive days at the UAE Tour and placing a historic four riders in the breakaway at the iconic Milan-San Remo.”

Team Novo Nordisk is part of the Novo Nordisk’s Changing Diabetes initiative, a global commitment to improving conditions for the 425 million people living with diabetes today and those at risk of developing diabetes.

“We are proud to continue the partnership, Team Novo Nordisk is truly showcasing that when managed well, diabetes does not have to hold you back,” said Camilla Sylvest, Executive Vice President, Commercial Strategy & Corporate Affairs at Novo Nordisk.

Racing on the International Cycling Union (UCI) Professional Continental Tour, the team aims to increase awareness of diabetes with the world’s passionate cycling fans while also bringing a new audience to cycling through the extensive diabetes community.

With title sponsorship secured through 2020, Southerland emphasized that the team’s objectives remain focused on investing and developing athletes with type 1 diabetes.

“As Team Novo Nordisk and Novo Nordisk approach the 100th anniversary since the discovery of insulin as dedicated partners, I am proud to continue changing diabetes together. We keep setting the bar higher and are driven to see how far our athletes can take this dream. We are determined to change the world one individual at a time.”

Since its launch, Team Novo Nordisk has built one of the largest fan bases in both professional cycling and diabetes. As of May 2019, the team has more than 8.4 million fans across its social media platforms.

“We are grateful for our millions of fans who follow our athletes daily along with the growing interest from physicians and journalists,” said Southerland. “Last year, we reached nearly four billion people through the media, and we are extremely motivated to keep growing this number. Together with Novo Nordisk, we are truly changing diabetes.”

About Team Novo Nordisk
Team Novo Nordisk is a global all-diabetes sports team of cyclists spearheaded by the world’s first all-diabetes UCI Professional Continental cycling team. In 2012, Phil Southerland, co-founder and CEO of the team, and global healthcare company Novo Nordisk, came together to create Team Novo Nordisk, based on a shared vision to inspire, educate and empower people around the world affected by diabetes. For more information, go to http://www.teamnovonordisk.com.

About Novo Nordisk
Novo Nordisk is a global healthcare company with more than 95 years of innovation and leadership in diabetes care. This heritage has given us experience and capabilities that also enable us to help people defeat obesity, haemophilia, growth disorders and other serious chronic diseases. Headquartered in Denmark, Novo Nordisk employs approximately 43,200 people in 80 countries and markets its products in more than 170 countries. For more information, visit novonordisk.com, Facebook, Twitter, LinkedIn, YouTube.