Now that record-breaking ultra-long-distance flights are being tested by airlines, so too are products being tested to ease suffering from the debilitating disorder known as Jet Lag. To counter the long journey menace, a Southern California company, Nutrimark,™ announces that it’s revolutionary Prickly Pear extract bears amazing fruit for the well being of air travelers. 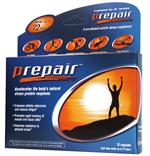 The proprietary extract in Prepair™ works in response to the stresses that cause Jet Lag by accelerating the synthesis of protective substances in the body known as Heat Shock Proteins or HSPs.

An Ounce Of Prevention Is Worth A Pound of Cure. -- Henry deBracton 1240 A.D.

Now a patented extract of Prickly Pear fruit, trademarked as Tex-OE, Opuntia Mesocarp Extract®, provides protection from disruptions to cells and tissue and inflammation that leads to Jet Lag Disorder. This amazing extract, effective at countering the menace of Jet Lag, is available in a dietary supplement product called Prepair™.

Today, millions of airline travelers can find immediate usefulness in this botanical extract that has the ability to prevent the jet-age malady known as Jet Lag. The revolutionary botanical extract was discovered by renowned cell biology/pharmacology researchers at ICP-Texinfine, Lyon, France from a fruit that thrives in the scorching temperatures of the world's deserts. The Prickly Pear fruit, is a member of the Cactus family known as Opuntia ficus indica. In their extensive examination of the cactus, the scientists uncovered an incredible finding. The unique environmental defense mechanism of the cactus fruit centers on its ability to regulate and rapidly induce the synthesis of protective and restorative Heat Shock Proteins (HSPs). Common to all living things, HSPs protect cells and tissue from many types of stress.

In the human body, HSPs play a natural protection and recovery role to prevent damage from stresses and the pain and fatigue that damage to cells and tissue brings. HSPs are the vital proteins that help protect our cells and tissue and enable them to recover from stresses of all types. Unfortunately it normally takes 2-3 hours for HSPs to elevate in our body, in response to stresses, allowing damage to occur. To rapidly accelerate the synthesis of our protective proteins, (up to 20 times faster) the scientists developed the extract, Tex-OE®, with special bioactive molecules derived by a patented process from the mesocarp (skin) of Prickly Pear fruit. The patented extract has been clinically proven to protect the human body against various types of aggressions by greatly enhancing the ability of the body to rapidly accelerate synthesis of the stress proteins that prevent inflammation.

Tex-OE®, the extract created by a patented process, has been clinically proven to possess the power to protect the human body from the ravages of many types of stress: physical; chemical; oxidative; ionizing; thermal; and mental. In doing so, it also provides effective protection from Jet Lag.

In long distance air travel, influencers such as: air cabin pressure; low humidity; lack of cabin mobility; differing time zones; and damage to our Circadian Sleep Rhythm, can contribute to a wide range of Jet Lag symptoms. These include and are not limited to: disturbed sleep; fatigue; difficulty functioning and concentrating; stomach problems; mood swings and general feeling of being unwell. Preconditioning your body with Prepair™ (with Tex-OE®) can significantly protect against uncomfortable Jet Lag symptoms that can take their toll on travel plans.

HPF Hangover Prevention Formula™, also containing Tex-OE®, has been clinically proven in a double blind study at Tulane University Medical Center among 60 graduate medical students. The study was peer-reviewed and published by the American Medical Association in one of the nation's most prestigious medical journals-- The Archives of Internal Medicine. The product is being marketed to anyone who wants to "prevent" the morning-after ravages of a hangover -- instead of trying to cure an existing one.

One dose of the products containing Tex-OE® will provide the protection needed to help the body overcome the effects of various types of stress for a period up to 72 hours. Products may be ordered by calling (800) 720-2970. Or, by visiting: http://www.nutrimark.net