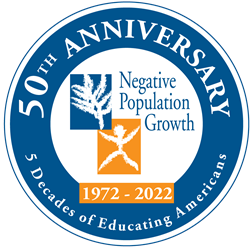 Across the country, school districts are finding it increasingly difficult to fulfill the educational needs of their students. Classrooms are at capacity while school administrators scramble to hire teachers to meet the demand for educators. A new Forum paper published by Negative Population Growth, Inc. suggests the solution to this problem is reconsidering current immigration policies. Written by Nathanial Gronewold, Crowded Classrooms, Teacher Shortages – Demographic Changes Could Help Our Nation’s Troubled Schools, But Only If We Let Them, illustrates the challenges faced by these school systems and the additional strain on students. “Overcrowding causes behavioral problems, classroom disruptions, and weaker educational outcomes,” Gronewold notes, adding: “Lower birth rates could deliver relief in the coming years as U.S. enrollments are expected to decline.”

Beginning with his own experience, Gronewold paints a picture of what it was like for him as a high school student in northern Arizona. Outdoor lockers, “temporary” classrooms in trailers, and an overwhelmed faculty represent just some of what Gronewold explains were the effects of rapid population growth in his area. These same issues are still found throughout the nation. Gronewold believes high rates of immigration and domestic migration are both root causes, stating: “Schools need relief. This may be a difficult and sensitive conversation to embark on, but we should have the courage to do so anyway, if only to better understand the strain and pain that so many school districts are experiencing and how we can at least avoid exacerbating their circumstances.”

Gronewold then speaks on teacher shortages, sharing that school districts nationwide are considering a four-day school week in response to those shortages. “Data shows that school districts in 25 states have already adopted four-day teaching weeks. The practice is most common in Colorado, New Mexico, South Dakota, Idaho, and Oregon, with over 20% of school districts in these states having switched to a four-day instructional model,” Gronewold states, adding: “All of those states have something in common – they’ve been experiencing high levels of population growth.” With over 35,000 teacher vacancies across America, the strain on schools is far from over. Gronewold then says that classroom size is also an issue coast to coast, one that could naturally resolve over time, but only if population numbers decrease.

Looking ahead to 2030, Gronewold is cautiously hopeful. He lists a few reasons for this, saying the population growth rate in 2021 was the lowest ever recorded. He also notes that the most populous states in this country are becoming less populous (New York and California experienced large outflows of domestic migration). Gronewold shares, "The low birth rate and a slowdown in immigration are starting to have a real impact.” Gronewold then confronts those who believe lower birth rates are a problem for the country, saying: “If pro-population explosion economists are to be believed, growth and only growth, is always pure, good, and righteous…Except, we all know this isn’t true. Our school children can certainly attest to this fact – larger, more crowded, and ever more populous schools with shrinking faculties are not creating better educational outcomes or a more competitive workforce.”

Gronewold closes his paper by proposing that, perhaps, if leaders and policymakers took the time to consider the quality of life for existing Americans, they would see how wrong they are about the necessity for constant growth. He notes: “In debates over population and demographics, far too few economists, journalists, and politicians pushing for wide-open immigration policies and more and ever higher numbers of people living in America seemingly to infinity pause to consider how these policies may actually end up harming everyone involved, including the large number of immigrants they want to welcome with open arms. Maybe it’s time they did.”