Numbers in New empty tomb Book Locate the Heart of the Dying Church's Choice: Serve God, in Jesus' Name, With Money on a Scale With Global Need — or Serve Money

Data in empty tomb's new book, as well as various surveys, point to trends suggesting the church in the U.S. is dying. The church can serve God, in Jesus' name, with money to reach global child-death reduction goals. Or the church can continue present patterns. 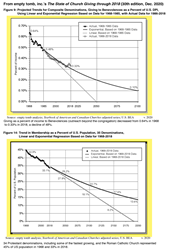 The new empty tomb book concludes that the church will not reverse these trends unless it helps people integrate their money with their faith in God.

Numbers in empty tomb's latest book point to downward trends in church giving and membership. To change the trends, the church needs to serve God with money by offering a vision on a scale with global need that will capture the imaginations and attract the giving of members and those still identifying with the church. It will, however, take initial leadership from individual venture philanthropists to mobilize such a counterstrategy to engage the entrenched patterns.

The negative trends found in the data analyzed by empty tomb are echoed in various surveys. For example, a recent survey by Dr. George Barna finds many Americans combining "Moralistic Therapeutic Deism" with traditional Christianity, and 43% of Millennials "Don't know, care, or believe that God exists." Noting this emergence of "radically redefined" institutions, including churches, Barna states: "From a nationwide perspective, the Christian Church has done shockingly little to push back."

The downward trends and changes in perspective have occurred when affluence has spread throughout the U.S., the book documents. An analysis in chapter 4 of empty tomb's book, The State of Church Giving through 2018, found that Americans, on average, had incomes, after taxes and inflation were factored out, that were 593% greater in 2018 than in 1921.

The book quotes research that found, "In 1920, only 1% of U.S. homes had electricity and indoor plumbing" (Lawrence Berkeley National Laboratory). Yet, the end of the 1800s into the early 1900s saw the church in the U.S. launch a movement that founded schools, universities and publishing houses, and build clinics, hospitals and orphanages around the globe.

Today, church leaders have not mobilized the vastly increased resources of church members in a similar manner. The empty tomb book observes that Government, which now proposes plans that cost trillions, and business have no problem targeting the increased resources available to Americans. "Yet the church has no language for vision casting the actions that are now possible through faithful obedience," the book notes.

This lack of leadership exists even though money is a common topic in the Bible. The book quotes Wesley Wilmer, who reviewed topics in the Bible and found that "believe(ers), (ing) appeared 272 times, prayer 371 times, love or loving 714 times, and possessions and giving appearing 2,172 times."

The book also quotes Michael Craven, president of Center for Christ and Culture, who wrote: "The reduction of the gospel to merely personal salvation has narrowed our conceptions of what we believe we are called to do in the world to little more than sharing some facts about Jesus and inviting others to agree with those facts." Instead, Craven goes on: "This kingdom represents God's redemptive rule and reign, in which Christ the King is making all things new, setting right what sin has set wrong in the world, and gathering a people for himself, the church."

In the absence of church leadership presenting the Bible's perspective on how to navigate life and money, an article in The Lancet describes loneliness as an increasingly serious health issue. Meanwhile, in a 2019 survey, 30% of Millennials reported they are lonely. And a 2019 report, supported by the U.S. National Institute on Aging, stated that "deaths of despair" (fatal drug overdoses, alcohol-related diseases, and suicides) have contributed to a decrease in life expectancy in the U.S. since 2014.

The book notes that a 2020 Harvard T.H. Chan School of Public Health study found that "People who attended religious services at least once a week were significantly less likely to die from 'deaths of despair'…" Yet fewer people are turning to churches as a counter to these life-threatening conditions.

The new book by empty tomb quotes philosopher Jacques Ellul, from his Money and Power, as observing that Money is a spiritual force that must be "desacralized" by learning to "give": "The faithfulness of God is not reserved for spiritual things; it must be engraved on the things of this world."

Data in the new book and surveys point to what can be described as a dying church. Another example is a study in Foreign Affairs that compared the state of religion in 49 countries from 1981 to 2007, with the period 2007 to 2019. Since 2007, the study found, "… things have changed with surprising speed." Most of the countries, including the U.S., had become less religious by 2019.

The new empty tomb book concludes that the church will not reverse these trends unless it helps people integrate their money with their faith in God. Church leadership can offer an agenda that challenges members to serve God with their money, rather than serve Money primarily with apparent side effects of loneliness and despair.

The agenda for affluence that the church offers needs to be on a scale large enough to challenge the imaginations, and today's level of resources, of those who still identify with the church. In the late 1800s, the rallying cry was the "Evangelization of the World in this Generation."

That was then. Today, empty tomb suggests, an agenda that is begging to be engaged is the possibility of reducing the rate of child deaths in children under age 5 around the globe. Twice, in 1990 and 2000, world leaders "promised" (their word) to reduce to goal levels the rate at which children under the age of five die from treatable causes. Although progress was made, the reduction goals set were not met. As a result, 1.2 million children die each year in this "Promise Gap."

The church, at this point, continues to have delivery and communication systems that place it at the forefront of institutions that could impact this need. Challenging members and those still interested in the church to help, in Jesus' name, stop these child deaths, could engage the imaginations of people now abandoned by the church to serving Money. Using money to serve God's purposes could provide a powerful alternative to using money primarily for self, for lack of engaging alternatives.

Available data analyzed by empty tomb indicates that $16 billion a year is needed to reach child-death reduction goal levels by 2025. This amount is not out of line in a country that spends $22 billion a year on chocolate.

Given the current patterns in the church, leadership is needed initially from individual venture philanthropists to cast the vision of what is still possible through the church. Three to ten such philanthropists could provide the first year's $9.412 billion to challenge churches throughout the U.S. to match $8 billion and set a new direction for the churches, and for the people.

The alternative seemingly is to continue to document not only declines in the church, but in society as a whole.

The outline of the matching project is available at missionmatch.org.

For statistics on 1920 lifestyles: James, D. Lutz, Lawrence Berkeley National Laboratory; "Lest We Forget, a Short History of Housing in the United States"; American Council for an Energy-Efficient Economy (ACEEE); 2004; p. 2 of 11/15/2020 3:04 PM printout.

The State of Church Giving through 2018 Fig. 9 and Fig. 14Giving as a percent of Benevolences (activities outside the congregation) and Membership as a percent of US population are in decline.