A Central Park Hotel is a wonderful place to be during the holidays, and many NYC Events mark the season including Macy’s Thanksgiving Day Parade, and the Tree Lighting at Rockefeller Center. Park Lane Hotel has special offers to welcome holiday visitors - View offer details > 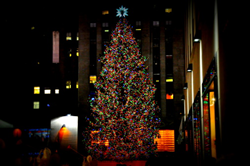 The tree lighting at Rockefeller Center is one of the NYC events that helps kick off the holiday season.

Central Park Hotels like Park Lane Hotel prepare to welcome the many visitors who come to enjoy NYC Events that celebrate the holiday season.

Macy’s Thanksgiving Day Parade
Thanksgiving Day
This NYC Event is one of the most popular of the year. More than 3 million people will line the parade route to watch the procession of floats, marching bands, and celebrity guests. This year’s special guests include Sting, KISS, and many of the favorite characters from Sesame Street. Park Lane Hotel is located just half a block from the parade route.

Tree Lighting at Rockefeller Center
December 3, 2014
The massive Norway spruce will be lit for the first time during this NYC Event. The tree, which stands an impressive 85 feet tall, will be adorned with 45,000 lights. Tens of thousands of people will gather at Rockefeller Center to watch as the tree is lit, and many more will watch the festivities on TV.

Radio City Christmas Spectacular
Through December 31, 2014
Radio City Music Hall | 1260 Avenue of the Americas New York, NY 10020
Tel: 212.465.6741
Seeing the Rockettes perform during this NYC event is a holiday tradition in some families. Many book rooms at Central Park Hotels so they can enjoy this show with their children and grandchildren. The amazing costumes, sets, music, and dancing make this a fun thing to do in NY for all ages.

Times Square New Year’s Eve
December 31, 2014
One million people will gather in Times Square to watch the iconic ball drop from 70-feet in the air, and about a billion more will watch on TV. Musical performances and other special events will take place on the stage helping to make this NYC event one of the most popular New Year’s Eve events in the world.

The Park Lane Hotel provides Guests with a memorable dining experience with The Park Room, an iconic NYC Restaurant. When you're ready for a relaxing cocktail at the end of a day of meetings or sightseeing, stop into Harry's New York Bar - a New York institution enjoyed by residents and visitors in the know.

New York City is the Shopping Capital of the World and The Park Lane Hotel is at the center. A mere 5 minute walk will bring you to a NYC Shopping paradise on 5th Avenue and Madison Avenue which includes such names as Bergdorf Goodman, Tiffany’s, Van Clef and Arpels, Chanel, Louis Vuitton, Hermes, Bloomingdale’s, Gucci, Barney’s, Saks Fifth Avenue and many more. You can almost hear the sounds of voices streaming from Lincoln Center, with the Metropolitan Opera House, New York State Theatre (home of the NYC Opera, NYC Ballet, and the seasonal classic, Balanchine’s Nutcracker Suite), Avery Fisher Hall, Alice Tully Hall, and The Juilliard School.

You can enjoy an avant garde production at City Center or visit the Oratorio Society of New York at their Carnegie Hall home. The Broadway Theatre District is close by and has been the creative hub of musicals and dramatic productions for over 100 years.