NYC Real Estate Experts Weigh in on a Unified MLS 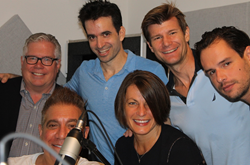 I do think we may be turning the corner in Manhattan – there’s more receptiveness to the concept of an MLS for the first time.

Inaccurate data is the major driver of financial and time drains for residential real estate professionals, according to Richard Haggerty, CEO of the Hudson Gateway Association of Realtors, Inc. (HGAR), and president of the New York MLS, LLC.

That’s why the time has come for a unified Multiple Listing Service in New York, he said.

“The Multiple Listing Service exists in every other part of the country, every other urban area – Chicago, Miami, LA – you name it. And it’s something real estate professionals take for granted,” Haggerty told Good Morning New York, Real Estate host Vince Rocco Aug. 20 in Manhattan.

“I do think we may be turning the corner in Manhattan – there’s more receptiveness to the concept of an MLS for the first time,” Haggerty added. “Part of that is really because we’ve expanded our boundaries. But I think StreetEasy has played a role in making folks a little bit more willing to talk.”

Haggerty shared with the panel HGAR’s efforts over the past 18 months to merge with the Multiple Listing Service of Long Island to create a regional MLS for New York. “Those (efforts) are coming to fruition,” he said. “We should launch in the fourth quarter of 2019. This is going to be a powerful regional MLS, and the goal is to empower our members and take advantage of the geography of New York City, the most powerful geography in the world.”

The new MLS – whose name will be announced in the fall – has already attracted a number of prestigious members, including Compass. CEO Robert Reffkin earlier this year said Compass was joining the new service to help agents showcase their listings to “millions of new consumers.”

The panel discussed some of the challenges of dealing with disparate data and questioned how a regional MLS for New York would fix that. Haggerty said the MLS would provide “accurate, standardized, easily accessible” data. “Every other real estate professional in the country is used to having that,” he said. “Agents in Manhattan have a challenge – they’ve got to work so much harder to get that information.”